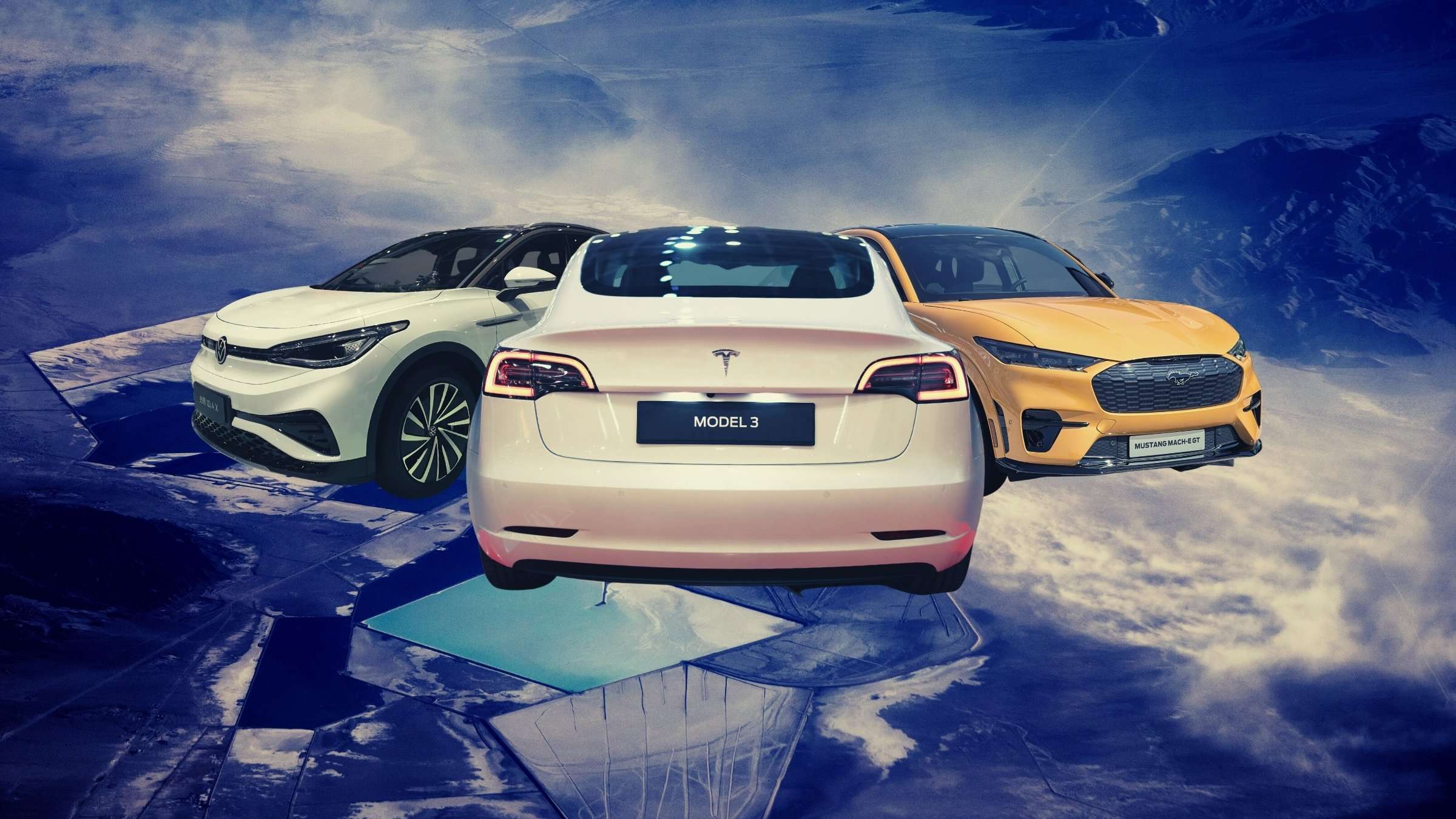 The auto industry is at an inflection point as electric vehicle sales double year-on-year. But lithium shortages could slow EV adoption.

Electric vehicle sales in the United States surged in the first quarter of 2022 as gas prices rose to record highs. The automobile industry is at an inflection point as purchases of internal combustion engines (ICE) plateau and EV adoption rises exponentially, driven by sales of market leader Tesla.

But lithium supply chain issues and the slow pace of EV charging networks put the pace of growth of EV sales at risk.

Electric Vehicle Sales in 2021: A Historic Turning Point for the Industry

U.S. sales of plug-in electric passenger vehicles — that includes hybrids as well as all-electric vehicles — doubled from roughly 300,000 in 2020 to 600,000 in 2021. That growth is even more impressive when compared to the sluggish three percent growth in the broader passenger vehicle segment. According to BloombergNEF, ICE vehicle sales peaked in 2017. The segment, it says, is “now in permanent decline.”

BloombergNEF projects that global plug-in vehicle sales will triple from 6.6 million in 2021 to 20.6 million in 2025. Plug-in vehicles will make up 23 percent of total new passenger vehicle sales in 2025, compared to below 10 percent in 2021. And by the middle of this decade, plug-in hybrid sales will peak, with all-electric vehicles dominating the segment going forward.

The shift in momentum toward all-electric vehicles is now irreversible, but ICE vehicles aren’t just going to simply disappear. Electric vehicles — again, that includes all-electrics and plug-in hybrids — made up a minuscule 6.6 percent share of the U.S. passenger vehicle sales in May 2022. And in 2040, more than half of the cars on the road worldwide will still be ICE vehicles. Their presence will be more marked in the developing world.

Tesla Dominates the EV Industry, But Consumers Are Getting More Options

Tesla remains the top EV company in the United States, accounting for over 70 percent of all-electric or battery electric vehicle registrations in the first quarter of 2022. And it dominates the all-electric segment worldwide. (Technically, China’s BYD is the world’s largest EV company when hybrid vehicles are included in the count.)

In 2008, there was only one electric vehicle model available in the U.S, according to the Department of Energy. By 2016, that number grew to 29. And by 2020, the number of models available almost tripled to 83. The Hyundai Motor Group, which includes the Genesis, Hyundai, and Kia brands, may soon give Tesla a run for its money. In Q1 of 2022, the Hyundai Motor Group vehicles made up just over 9 percent of all-electric vehicle registrations, according to Automotive News. That share is significantly higher when hybrids are included.

While EV adoption will continue to grow, government mandates and high purchase prices will contribute to a divide in adoption between regions, with slower uptake by poorer countries.

Today, Europe and China are leading the path toward electrification, trailed by the U.S. China, the world’s largest market for electric vehicles, is treating EVs and other “new energy vehicles” as a strategic priority. The European Union has banned the sale of ICE vehicles by 2035. And there’s pressure on the Biden administration to do the same.

But EV adoption in the developing world — including India, Southeast Asia, and Africa — is much slower, due to cost and infrastructure. EVs remain more expensive than ICE vehicles. And charging options are far more limited in countries with lower levels of electrification and unreliable power supplies.

According to a McKinsey study, if federal electric vehicle sales targets are met by 2030, the number of EV charging stations would need to expand by a rate of twenty — far greater than what the Bipartisan Infrastructure Law has allocated funding for.

Lithium shortages will also constrain EV production. Lithium demand grew twice as fast as supply last year, according to Bank of America, sending prices through the roof. And while it projects a surplus in lithium supply next year, a deficit will reemerge in 2027. Lithium supply shortages will not only constrain electric vehicle production, but also result in higher prices for batteries and the cars themselves, making them less affordable for average consumers.

These are the top-selling all-electric vehicles in the United States in the first quarter of 2022, according to registration data tracked by Automotive News: