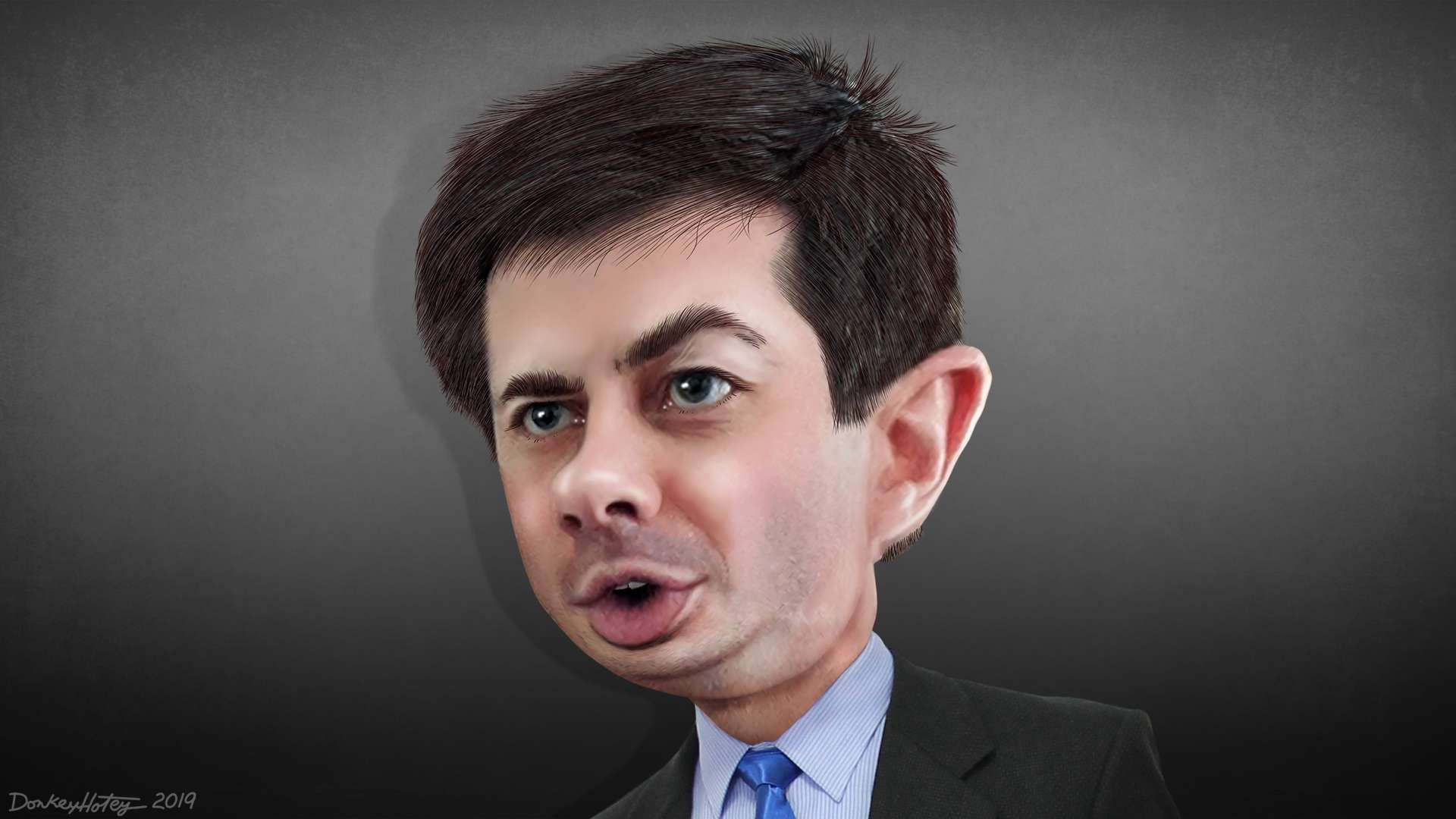 The Pete Buttigieg presidential campaign has been light on policy details. It’s focused instead on building the candidate’s image as a kind of centrist wunderkind from middle America able to check off many of the boxes, such as identity and experience, crucial for a run for America’s highest office.

But with the first round of Democratic debates set to take place at the end of this month, Buttigieg is finally offering some specifics to set himself apart from the pack. And he’s chosen to begin with foreign policy.

On Tuesday, Buttigieg addressed an audience at Indiana University’s Hamilton Lugar Center of Global and International Studies, broadly articulating his foreign policy. The location was no accident. It symbolized themes emphasized in the substance of the speech.

Rather than addressing a Washington, DC think tank, Buttigieg spoke at a center in his home state named after two former members of Congress from Indiana (Lee Hamilton and Dick Lugar) who reflect a now-gone bipartisan era of responsible Congressional oversight of U.S. foreign policy. The Buttigieg campaign also sought to drive home that the foreign policy he would pursue as president would be one built for Main Street, not Beltway, and certainly not Wall Street.

What Buttigieg offered was a centrist foreign policy palatable to progressives that marries ideas of American exceptionalism and values promotion with restraint and realism. He sounded a lot like former U.S. President Barack Obama.

The wave of progressivism overtaking the Democratic Party has begun impacting foreign policy.

Two of the top three Democratic candidates—Bernie Sanders and Elizabeth Warren—are staunchly anti-interventionist. Sanders, Warren, and a rising caucus within the Democratic Party, the Justice Democrats, have taken the lead in opposing U.S. support for the Saudi-led war in Yemen.

Criticism of Israel was once previously unpalatable in mainstream U.S. politics. But Israeli Prime Minister Benjamin Netanyahu’s adversarial relationship with Obama and alignment with President Donald Trump and the Republican Party has eroded the bipartisan consensus on Israel. Today, only a quarter of Americans between the ages of 18 and 29 view Israel as an ally. And roughly the same percentage of self-described liberals view Israel favorably. Support for Israel is fast eroding among Jewish millennials, who are overwhelmingly Democratic and find the occupation of Palestinian territory at odds with their progressive, postmodern values.

And virtually all leading Democrats remain opposed to the Trump administration’s exit from the Iran deal and potential U.S. military action against the country—though this reflects the Obama legacy more than an expressly progressive position.

National security has long been a Democratic Party vulnerability. A decade ago, Buttigieg—using his brief service as a military intelligence officer in Afghanistan—could have, and probably would have needed to, run as a “tough-on-national-security Democrat.” At the time, the liberal national security hawk was a trend reflected in the Democratic-leaning voices that emerged at the time, including talk show host Rachel Maddow and the Center for a New American Security think tank.

But that kind of centrism has diminishing appeal in U.S. partisan politics. This is no longer Bill Clinton’s Democratic Party. And to some extent, it’s no longer Barack Obama’s. Joe Biden, who served as Obama’s vice president for two terms, is leading in polls for the Democratic nomination. But his poll numbers have declined over the past month, according to the Real Clear Politics poll average, with Warren rising to third and Sanders retaining second place. Simply put, the progressives can’t be ignored. Indeed, for second-tier candidates like Buttigieg, they may have to be won over to overtake Sanders and Warren and close in on the centrist Biden.

A delicate balancing act is required for Buttigieg. He has to distinguish himself from the pack in the primaries, pass the progressive “purity tests,” while also not alienating general election voters.

Buttigieg also needs to articulate a foreign policy that goes beyond the Beltway’s fixation on abstract notions of American power and its insatiable appetite for war, and instead speak to the average American. On Tuesday, he succeeded in moving in that direction.

At the heart of Buttigieg’s foreign policy is his concept of “inclusive democratic capitalism,” which he says is what sets America apart from its authoritarian rivals and makes it a worthy global leader.

According to Buttigieg, it’s these core values—democracy, free enterprise, and social mobility—that make America great. America’s power abroad stems from its strength within.

Buttigieg is trying to strike a middle ground here. Unlike many on the far left, Buttigieg subscribes to a notion of American exceptionalism. But unlike many conservatives, he believes that exceptional status is contingent upon the United States living up to its values. It’s not divinely ordained. And it’s not a free license to invade other countries. But, in his view, the world needs America to model its values. And the big reason is the rise of China.

China and the Threat of ‘Autocratic Capitalism’

While China did not dominate Buttigieg’s narrative on Tuesday, he did frame the emerging superpower as America’s primary competitor. Buttigieg did not let Russia slide. He made sure to mention its interference in U.S. elections. But it’s China that in Buttigieg’s view—and this is really the consensus in Washington—that represents a comprehensive threat to the United States as a long-term geostrategic, economic, and ideological competitor.

Buttigieg said that China is offering the world an alternative to America’s “inclusive democratic capitalism” in the form of “autocratic capitalism.” That’s the big contrast that will define the rest of this half-century, in his view.

While Buttigieg went through a laundry list of ways China challenges U.S. interests and values—including the trillion-dollar Belt and Road Initiative and the internment of at least one million Muslims—he fell short of declaring a new Cold War with Beijing. And that’s one way in which he tried to distinguish himself from the Trump camp—or at least the hawks in the administration. Buttigieg asserted that there are a host of issues on which Beijing and Washington can cooperate, ranging from climate change and international peacekeeping. This careful calibration by Buttigieg is interesting. Were he running a decade ago, there would be pressure to identify a nation, ideology, or network as an existential threat to the United States, or find a “good war” as Obama did with Afghanistan. But this is a new era in American politics—one with a diminished appetite for overseas adventurism.

Building a Bridge Between Washington and America

Buttigieg is well aware that framing the challenge from Beijing in pure geostrategic terms has little value in today’s political environment. He said that foreign policy and national security decisions, including on issues like the South China Sea, “should be made through the prism of what it means for a place like South Bend.” America, he said, needs “a foreign policy that serves our people in their daily lives.”

“If gross inequality and declining social mobility persist in our country, our economic and political system will be less and less respected on the world stage…Strength is more than military power. It’s our power of inspiration.”

Buttigieg managed to tie the Chinese challenge back to bread and butter issues at home. Rather than compete with China on an infrastructure spending spree abroad, Buttigieg implied that such funds are better used at home, which in turn would amplify America’s image abroad. But to push forward large-scale public spending requires bipartisanship—the type of bipartisanship represented by Lee Hamilton and Richard Lugar. Honing in on the partisan gridlock in Congress, Buttigieg said that if Congress is unable to produce results on building domestic infrastructure, health care system, and nextgeneration technologies, then the United States “will not be convincing if the world sees China invest in more infrastructure abroad than we are prepared to invest here at home.”

By defining America’s global strength mainly in terms of the freedoms and quality of life of its people at home, Buttigieg is trying to converse with an electorate highly skeptical of the Washington establishment.

The approval rating of the U.S. Congress remains low, despite having risen to around 20 percent as of early May from a lowly 9 percent in November 2013. But the reelection rate of members of the House remains above 90 percent. New faces are entering the system, especially on the Democratic side of the aisle, but Congress is still mired in partisan gridlock. Buttigieg identifies extreme partisanship and social inequality as threats to American power abroad.

An End to Endless Wars: Restraint Without Isolationism

Buttigieg is neither a dove nor a hawk. He’s a realist in the mold of Obama. He believes in the use of force when necessary, though he says “the next president must set a high bar” on it. While he strongly believes that the United States should promote its values abroad, he suggests that it’s best done by living up to those values instead of pursuing “violent” regime change of the George W. Bush administration.

While Buttigieg said that the U.S.-led invasion of Afghanistan was justified, he did not comment specifically about the effort to pursue a peace deal with the Taliban. In contrast, progressives like Warren have called for a U.S. withdrawal. Buttigieg came out in support of “limited, focused, and specialized counterterrorism and intelligence missions in places like Afghanistan.” And here’s the problem: so did Obama. But even modest engagements can put America on the path of mission creep.

Addressing the anti-war constituency in the Demoratic party, Buttigieg explicitly said that America cannot fix every fragile state and “must put an end to endless war and focus on future threats.” Channeling Sun Tzu, he said: “War itself represents a kind of failure. And true success lies in preventing conflict.”

A Youthful Visionary to Lead in an Era of Change

Buttigieg is in many ways a typical millennial. He’s gone through several career changes. And while he’s had a diverse set of jobs—from management consultant to intelligence specialist and mayor—he’s just thirty-seven years old. So experience and depth of experience are potential liabilities for him. What Buttigieg sought to do on Tuesday, and will likely continue to do in the future, is convert that vulnerability—his relative youth—into an asset. Buttigieg seemed to take a swipe at his fellow Democrats, stating that they have failed to offer a strategy to deal with the major challenges of our time: automation, authoritarianism, crony capitalism, and the forever wars.

As the youngest aspirant for the Democratic nomination, his age is what sets him apart—especially when compared to the top three contenders, all of whom are near or above the age of seventy. Buttigieg presented himself as a youthful voice, focused on the future, not the past—a very obvious attempt to channel John F. Kennedy and Barack Obama.

Buttigieg’s foreign policy speech isn’t enough to give him a boost in a crowded pool of contenders for the Democratic nomination. But we’re now getting a sense of how Buttigieg will try to separate himself from the pack of second-tier candidates and make his way toward the top. We’ll see a lot more of that in the debates later this month. Stay tuned.