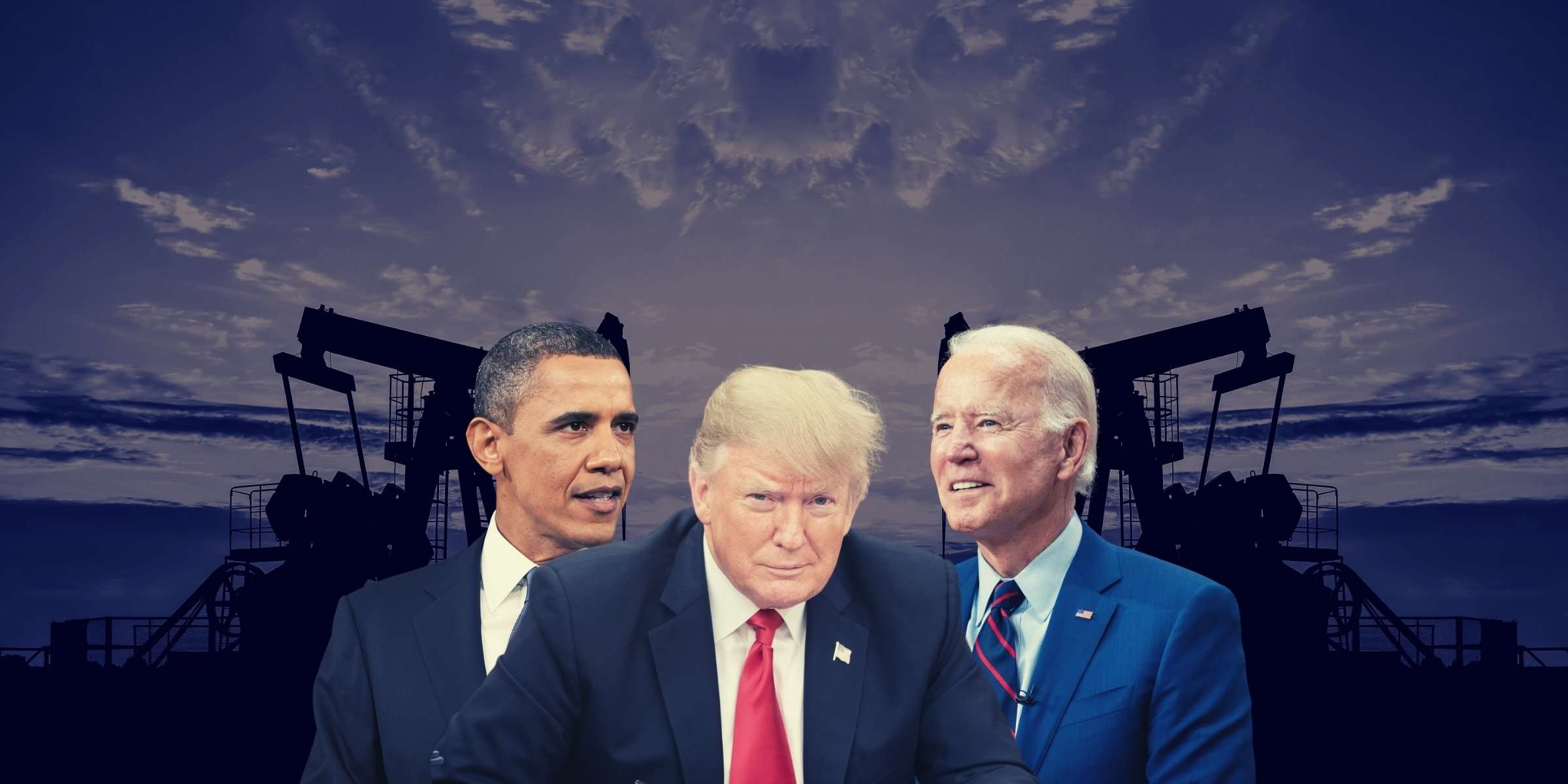 Energy independence has been the goal of American presidents since Richard Nixon. (Image Credit: White House)

U.S. energy independence has been the goal of American presidents going back to Richard Nixon.

In 1973, oil-producing Arab countries imposed an embargo on exports to the U.S. in response to its arming of Israel in its war with Egypt and Syria. In a matter of months, the price of a barrel of oil quadrupled. And gas shortages left Americans waiting in long lines at the pump.

In response, Nixon announced a broad range of policies, including energy conservation measures like the establishment of a 50 miles per hour speed limit. But higher gas prices stuck even after the oil embargo was lifted. The prolonged energy crisis continued to dog Nixon’s successor, President Jimmy Carter, who pledged that the U.S. would “never use more foreign oil than we did in 1977.”

U.S. oil imports plummeted once Carter left office — partly due to his conservation policies — only to surge for two decades from the late 1980s into the Great Recession of 2008. As U.S. energy imports peaked in the mid-2000s, President George W. Bush, who came from an oil family, famously proclaimed: “America is addicted to oil.”

Today, America is the world’s largest producer of oil. And by some definitions, the U.S. has finally achieved energy independence. This is due to what’s called the “shale revolution,” which has dramatically boosted U.S. oil and gas production since 2008.

Oil has been commercially exploited in the U.S. since the 19th century — first as kerosene, then as gasoline. The United States has actually been the world’s top producer of oil for most of the 20th century. But with the spread of the automobile, America’s appetite for oil was so voracious that it became a net importer in 1948. By the 1970s, American oil reserves were rapidly depleting and its lead in oil production was overtaken by the Soviet Union in the 1970s.

In 2018, the U.S. regained the mantle as the world’s top crude oil producer, thanks to the “shale revolution.”

The “shale revolution” refers to the rapid commercial extraction of oil and gas deposits trapped deep below the earth’s surface. Conventional oil and gas come from reservoirs in porous rock formations around 6,000 feet below the earth’s surface. They’re extracted using vertical drilling. Shale hydrocarbons, in contrast, are trapped in rock formations that are as deep as 9,000 feet.

Shale hydrocarbons truly became commercially viable at a large scale in the late 1990s with the emergence of horizontal drilling and hydraulic fracturing (also known as fracking). In the fracking process, horizontal drilling first breaks opens up the rock where the oil and/or gas is trapped. Then water, sand, and chemicals are injected at high pressures to release the hydrocarbons. It’s important to note here that fracking is not without its downsides. Fracking is not only water-intensive, but some of these chemicals used in the process, such as PFAS, are toxic.

These methods and technologies made previously inaccessible oil and gas deposits commercially exploitable. Some also argue that the so-called “Halliburton Loophole” — which exempted fracking from regulation by the Environmental Protection Agency, under the George W. Bush-era Energy Policy Act of 2005 — also played a critical role in catalyzing the shale revolution.

U.S. oil production took off during the Obama era, nearly doubling over the course of his presidency. Those gains continued in the era of President Donald Trump, with U.S. oil production rising by another 45 percent until the start of the COVID pandemic.

Is the U.S. Energy Independent?

“Energy independence” is ultimately a political term whose definitions have varied over the course of decades. Butler University professor Richard Z. Grossman, a staunch critic of energy independence both as rhetoric and policy, argues that the term has become a “trope” without a clear definition.

Nixon’s 1973 energy independence pledge reflects a maximalist definition. In announcing Project Independence, Nixon said that by 1980 “we shall be able to meet America’s energy needs from America’s own energy resources.” But Nixon’s goal of complete self-sufficiency has yet to be realized. And it probably will never be, given that it is both unrealistic and unnecessary.

Others, such as Gal Luft and Anne Korin, reject equating energy independence with “autarky” or complete self-sufficiency and instead define it in broad, strategic terms. Energy independence, in their view, means that “it no longer matters who holds the reserves, that oil becomes much less relevant to global affairs, [and] that it becomes just another commodity.”

Energy independence is more commonly defined these days in relative terms, like becoming a net total energy exporter — in other words, a country that exports more energy of all types, including coal, natural gas, and oil, than it imports.

Was the U.S. Energy Independent Under Trump?

U.S. shale oil and gas production surged under Trump. And America became energy independent under his administration. But American energy independence is a success story that goes back decades.

The Nixon and Carter administrations should be credited for policies like fuel economy mandates that have improved the efficiency of energy usage and control. The Obama administration invested over $90 billion in clean energy and shale energy production took off during his two terms as president. In fact, during the Obama administration, the U.S. also resumed exporting oil and began exporting LNG.

The nearly half-century pursuit of energy independence has yielded strategic benefits for the U.S.

One, the U.S. is less dependent on Middle Eastern oil than it has been in decades. U.S. crude oil imports from the Persian Gulf today are the lowest since the 1980s. In 2021, the U.S. imported 71% of its crude oil from Canada and Mexico. This reduces the likelihood that the U.S. will be drawn into Middle Eastern conflicts and enables it to divert greater resources toward the China challenge in Asia.

Two, the U.S. is now a swing producer of LNG, meaning that it has the reserve capacity to increase or decrease production and determine market dynamics. This allows the U.S. to transfer its gains in energy security to European allies. From November 2021 into January of this year, the U.S. quickly doubled LNG exports to Europe, reducing their dependence on Russian natural gas. And on March 25, President Joe Biden pledged to increase those exports to Europe over the course of this decade.

The Limits of Energy Independence

Energy independence is an evolving political aim, not an immutable desired end state. Politicians can promise voters the sun and the moon, but, for a number of reasons, no responsible official could promise Americans that an energy-independent U.S. would be unaffected by global energy market dynamics.

Moreover, energy independence doesn’t mean that the U.S. has full control over pricing at home. Fossil fuels are globally traded commodities. Their prices are determined by international market forces.

Finally, there are multiple forms of energy and no country dominates all forms of power. A country with surplus coal or oil might still need to import uranium for nuclear power.

And interdependence extends to renewables. While renewable energy, with the exception of green hydrogen, doesn’t require a fuel source, renewable power generation technology relies on global supply chains: cobalt from Congo, nickel from Russia, and solar panels made in China.