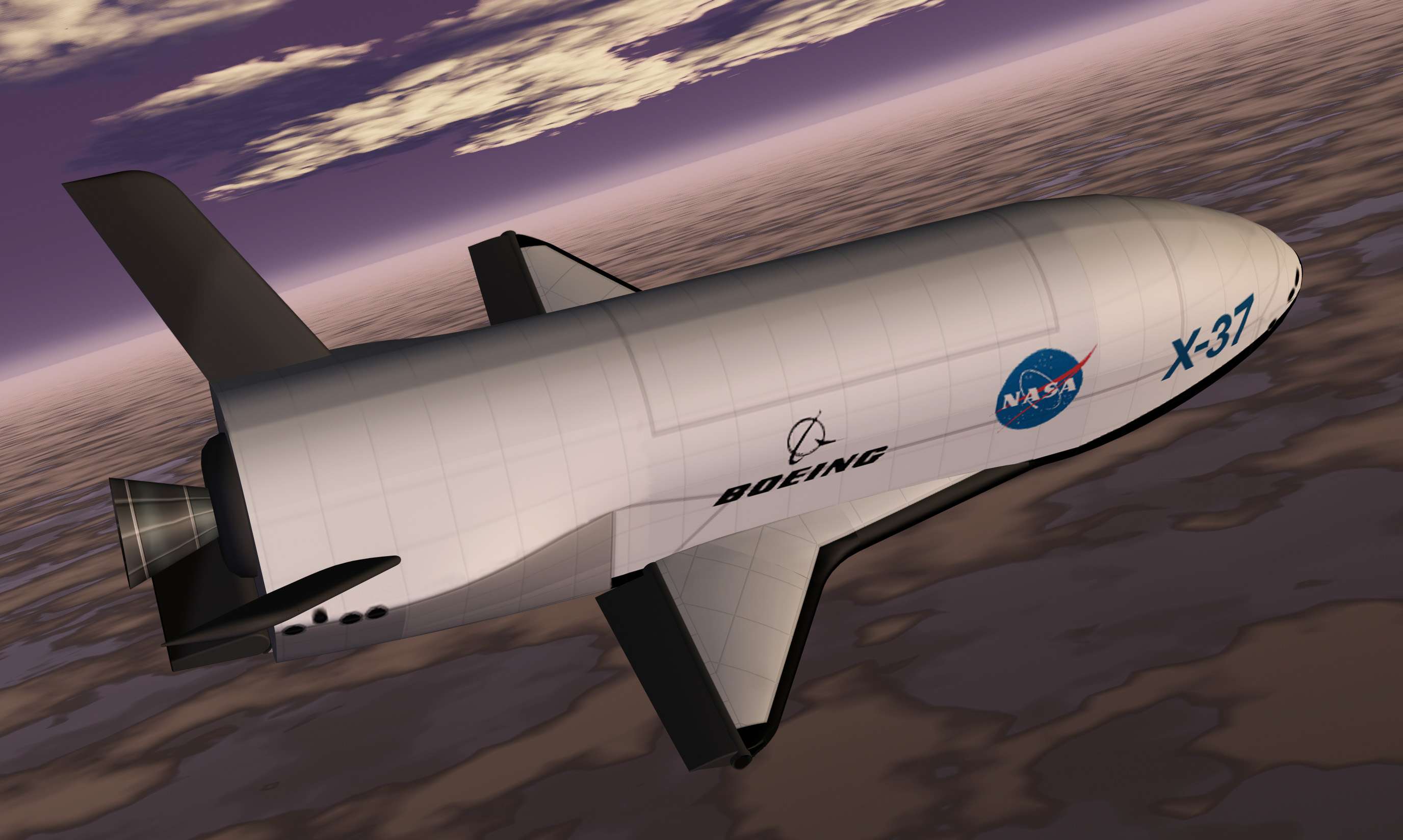 An artist's conception of the X-37B Advanced Technology Demonstrator as it glides to a landing on earth. (Image Credit: NASA)

Last week, amateur astronomer Ralf Vandebergh shared a picture of the spacecraft on Twitter of a secretive U.S. Air Force spacecraft, the X-37B, in orbit around the earth for the first time.

The X-37B — also known as the Orbital Test Vehicle — is a reusable space vehicle of the U.S. Air Force.  Originally a project of the U.S. National Aeronautics and Space Administration or NASA, the X-37 series was handed over to the U.S. Air Force after the space agency scrapped funding for the project. The U.S. Air Force announced the development of the vehicle in late 2006, but the maiden test flight was carried out in 2010.

The mission and objectives of the X-37B have been kept secret by the U.S. government.

But some observers speculate that the low-flying and long-duration past missions of the vehicle indicate that the payload it carries has military applications, including the deployment of surveillance technology to monitor China and Russia.

The plane’s electrically-propelled thrusters and its reusability could enable lower-cost and fuel-efficient space missions, such as repairing satellites, significantly enhancing the range of missions it can undertake.

The X-37B weighs close to 11,000 pounds, compared to the 165,000 pounds for a standard space shuttle. The steady thrust provided by electronic propulsion enables it to stay in orbit for long periods of time. It’s powered by solar cells and lithium-ion batteries. Boeing has built two models of the X-37B at a cost of $1 billion each.

Vandebergh claims that the X-37B is only a fraction of the size of the standard U.S. space shuttle (which was discontinued in 2011). The captured image shows the vehicle’s nose and tail, and part of its payload.

Both X-37B vehicles are kept at the Kennedy Space Center in Florida, occupying hangars used previously for NASA space shuttles. The space planes can be used to carry experimental payloads into space and bring them back to earth.

According to the description provided by the U.S. Air Force on its website, five successful missions of the X-37B have so far been launched. Four have completed their objectives and landed back on earth, while a fifth is in orbit since August 2017.

The longest mission undertaken by an X-37B was the fourth, launching in May 2015 and staying in orbit for around 717 days. Each mission of the space vehicle costs the American government around $200 million, reports The National Interest.

What Is the X-37B Space Plane Doing in Orbit?

The X-37B photographed by Vandebergh took off in August 2017 aboard a Falcon 9 rocket of Elon Musk-owned private space firm SpaceX. It has been in orbit for over 600 days on the latest mission, reports Space.com.

The fifth mission of the X-37B has been launched into and will be landed from a higher inclination orbit than previous ones, enabling it to cover more ground north of the equator as it goes around the earth. (The inclination of a space vehicle is a measure of the highest north-south points it passes over in orbit.)

Some details of the past missions of the X-37B have allowed space experts to speculate about the benefits of the unique features of X-37B and the payload it might carry. According to a report published in Air Space Magazine, the plane has military applications, specifically surveillance and counter-space operations.

The thrusters being used on the X-37B make use of electronic propulsion and could be used to place the vehicle in a low-earth orbit for high-resolution monitoring of the earth. The Hall thrusters, as they are called, also make it easy for lighter payloads to be put into orbit onboard the X-37B. Since the vehicle is reusable, a larger version of the X-37B could also be used to bring satellites back to earth for maintenance.

Electronic propulsion is a low-cost method of providing space vehicles thrust, lowering the cost of space missions significantly. The X-37B can also likely be modified to fly passengers out to space in the future, possibly to even conduct satellite repair at a much lower cost. But the primary purpose of the low-flying, long-duration, and unmanned vehicle could be the deployment of communications and advanced surveillance technology in space.

A 2012 BBC report noted that the angle at which the X-37B was orbiting the earth was similar to the path of the Chinese Tiangong-I space lab, leading to speculation that the X-37B is or was spying on the Chinese.

According to a report in The National Interest, the latest flight will enable allows the plane to pass over large swathes of Russian territory for the first time. It can carry a variety of payloads, including spy satellites and even weapons.

As the United States pushes for a permanent presence on the moon and looks to build a dedicated military unit for space-related activities, the introduction of secretive space missions also risks undermining space cooperation treaties signed with Russia during the Cold War, as well as increasing tensions with rising space power China.

In this article:Featured, Space, X-37B