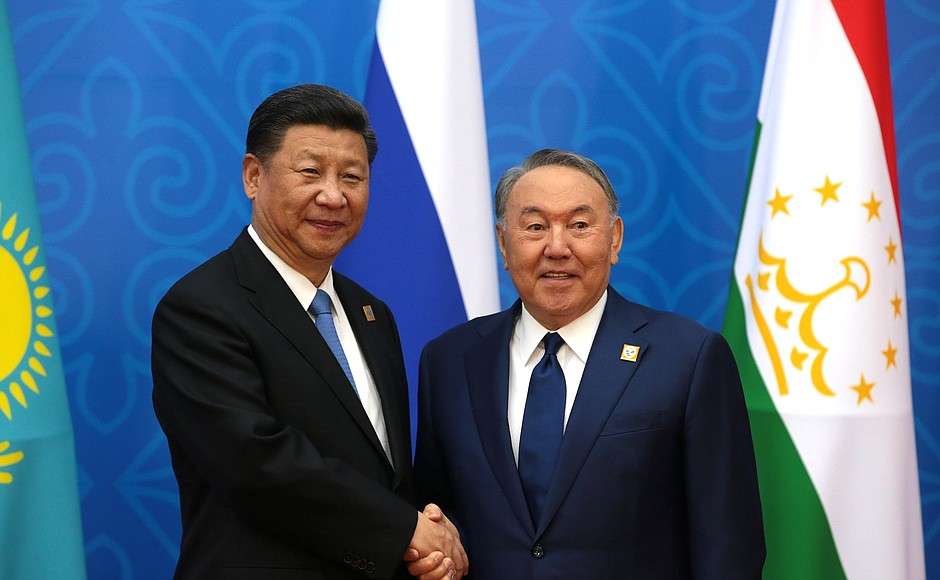 Rallies began as talk circulated about plans to build dozens of factories.

Chinese President Xi Jinping and then-Kazakhstan President Nursultan Nazarbayev shake hands ahead of the meeting of the Council of Heads of State of the Shanghai Cooperation Organisation (SCO) on June 9, 2017. (Image Credit: Kremlin)

Dozens mustered in front of the mayor’s office this week in a town in western Kazakhstan with a history of violent unrest to voice their discontent over concerns that deepening economic ties with Beijing could precipitate an influx of Chinese workers.

The rally, and other smaller ones around the country, will unnerve a government that was caught off-balance by a string of anti-Beijing demonstrations in 2016.

President Kassym-Jomart Tokayev is slated to travel to China next week for a visit that is expected to generate fresh investment.

Footage of the rally in Zhanaozen filmed on September 2 showed demonstrators delivering fiery speeches objecting to the potential construction of Chinese factories.

“We don’t want jobs. We don’t want factories. We just demand that you not let them in,” said one protester, as seen in footage uploaded to the internet by an opposition movement.

Another speaker cited the ill-treatment of ethnic Kazakhs and Uyghurs in China’s Xinjiang region, where hundreds of thousands of Muslims have been rounded up and forced to undergo ideological reconditioning in reeducation camps.

Anxieties about China, which shares a 1,783-kilometers border with Kazakhstan, stems from a number of sources, ranging from perceptions at Beijing’s overweening influence in the economy and the country’s sheer population superiority. Horror stories emerging from Xinjiang have only compounded such suspicions.

Zhanaozen deputy mayor Amangali Nurdauletov sought to calm tempers among the crowd. He was rebuffed. The mayor, Adilbek Daulbayev, appealed with demonstrators to enter the town hall assembly room, but that suggestion too was rejected.

“Bring representatives of [state-owned oil and gas company] KazMunaiGaz … and someone from the governor’s office,” one protestor said. “Maybe even the governor himself.”

RFE/RL’s Kazakh service, Radio Azattyq, reported that the crowd only agreed to disperse after receiving assurances that the Mangystau provincial governor would arrive the following day.

While the authorities are usually intolerant of improvised and unauthorized rallies, Zhanaozen tends to receive more ginger treatment. Months of sit-ins by oil workers in the town center in 2011 culminated in unrest that December that left 16 people dead. Most of the fatalities were caused by police firing at rioters.

Officials in Nur-Sultan (formerly Astana) have scrambled to take control of the narrative on Kazakh-Chinese commercial ties. One goal was to quash circulating talk that Chinese companies are poised to build 55 factories across Kazakhstan.

“This information has been circulated either by bloggers or through WhatsApp. There is no such program,” said Deputy Foreign Minister Yermek Kosherbayev.

Kosherbayev said that any industrial enterprises set up in Kazakhstan would first need to be reviewed by a special state commission.

“No one is going to bring in old factories. Our commission will not let that happen,” Kosherbayev said.

But Deputy Investment and Development Minister Amaniyaz Yerzhanov said that there were indeed 55 Kazakh-Chinese joint projects – of which not all are factories – worth a total $27 billion. The investment covers a range of sectors, including energy, engineering, agriculture, construction, pharmaceuticals.

As promised, Mangystau governor Serikbai Trumov came out on September 3 to speak to the 500 or so people who gathered on Zhanozen central square. His approach was to plead with the crowd for understanding on the need for greater international engagement.

“This is the era of globalization. We cannot live in an insular world. We should be open,” Trumov said.

“But does globalization necessarily mean selling out the country?” retorted one man in the crowd.

The 55 projects figure has its origins in remarks made in April by former President Nursultan Nazarbayev, who was attending the second Belt and Road Forum for International Cooperation in Beijing. Responding to questions from reporters, Nazarbayev said 15 projects had already been completed and that another 11 were to be commissioned by the end of the year.

“Unlike the West, China never teaches us how to live. We are not Germans, we are Kazakhs,” said Nazarbayev, speaking about the advantages of attracting investment from China.

The Zhanaozen rally was echoed by other, much smaller, gatherings in the cities of Shymkent and Aktobe. In Nur-Sultan, Almaty, Karaganda some held pickets in support of the Zhanaozen protests.

The efforts of the Mangystau governor to talk people out of holding rallies seem to have had limited effect. On September 4, more than 1,000 people gathered on Yntymak square in Aktau, the provincial capital, to express their disapproval of the potential construction of China-sponsored industrial facilities.

In an unusual break from diplomatic circumspection, Beijing’s ambassador to Kazakhstan, Zhan Xiao, derided suggestions that his countrymen were proposing to take over the county en masse.

“One assumes that behind these protest speakers there are some forces trying to instigate negative sentiments against China and the development of our bilateral relations,” the ambassador said.

Kazakhstan is no stranger to flareups of Sinophobic feeling. When the government introduced legislative proposals to loosen rules on who was permitted to buy land in 2016, a swell of outrage ensued over concerns that large swathes of territory might be snatched up by Chinese investors. The government resolved that crisis through a twin strategy of canceling the proposed reform and imprisoning key rally organizers.

This article was originally published by Eurasianet.

In this article:Belt and Road Initiative, Central Asia, China, Kazakhstan

Darkhan Umirbekov is an editorial intern at Eurasianet and a recent graduate of Columbia Journalism School.