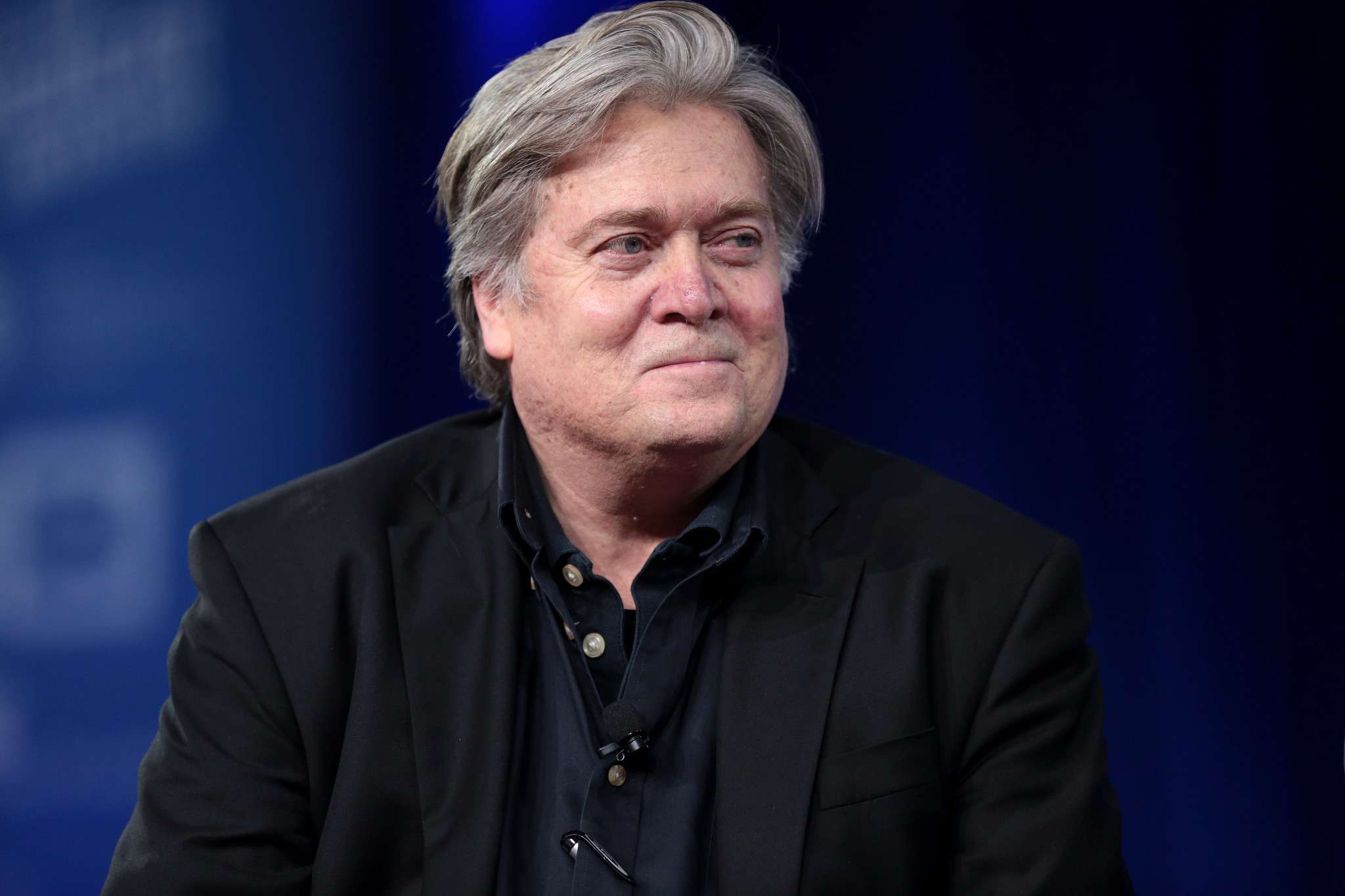 India may be hoping that Bannon can help deflect criticism of its human rights record in Kashmir. But Bannon may have China on his mind.

In a now-deleted tweet, India’s ambassador to the United States Harsh Shringla posted a photo of himself last night with Steve Bannon, the former Trump advisor and executive chairman of the alt-right Breitbart News site.

The juxtaposition of Bannon, who is seen by many as a white nationalist, with the envoy of a non-white country may seem odd to some. But Bannon has had a longstanding affection for Shringla’s boss, the Hindu nationalist Prime Minister Narendra Modi. In 2016, the New York Times described Bannon as an “admirer” of Modi.

Now, Bannon’s focus has been and remains the “Judeo-Christian” world. In 2017, he founded The Movement — an organization that promotes anti-European Union parties. But he’s also praised several Asian leaders, including Modi and Japanese Prime Minister Shinzo Abe.

Bannon’s ultimate aim is to lead a global movement of far-right nationalists who can roll back the economic liberalization, multilateralism, and multiculturalism witnessed since the end of the Second World War.

But since leaving the White House, Bannon has proven to be an out-of-depth interloper in Europe, lacking the language skills and understanding of local political dynamics to make a real impact. The same can be said for his campaign in Asia.

In describing Asian leaders, Bannon relies on forced, hackneyed comparisons to American politicians. He’s hailed both Modi and Japanese Prime Minister Shinzo Abe as being “Trump before Trump.” And in an interview this year with WION — an Indian news channel owned by a politician-businessman allied with Modi’s Bharatiya Janata Party — Bannon compared Modi several times to the late U.S. President Ronald Reagan.

Bannon said that Modi, like Reagan, won a second term in office with a landslide victory, despite a hostile press. But Modi actually has widespread support in the Indian media, especially on television. Leading Indian news channels, including the one that interviewed Bannon, sing Modi’s praises, despite the fact that his followers deride the media as “presstitutes” and Modi himself has never spoken at a domestic press conference as prime minister.

Islamophobia may have been one reason for Bannon’s affection for Modi, who presided over an anti-Muslim pogrom in 2002 and aims to create a “New India” where Muslims are forced to outwardly embrace Hinduism or be relegated to second-class citizens. Bannon has also said that he’s been inspired by Hinduism and has appropriated themes in the Bhagavad Gita to promote the idea of an ideological and militaristic clash of civilizations.

But anti-Muslim bigotry is less of a feature in Bannon’s public statements today. In 2017, Bannon praised Islam as a “major, great religion in the world” — a clear contrast to his statement in 2010 that “Islam is not a religion of peace.” This could be a temporary shift. It doesn’t mean that Bannon’s heart has changed. But Bannon — who has been staunchly pro-Israel despite allegations of anti-Semitism — has signaled an openness to working with Muslim leaders.

For example, Bannon seems to have wanted to make the impression last year that he reached out to Pakistani Prime Minister Imran Khan, who is seen as a Muslim populist. Khan has spoken of building a “New Pakistan” — though it’s an inclusive vision for his country, especially when compared to Modi’s “New India.”

In Bannon’s appearance on WION, the Indian interviewer tried several times to get him to say something negative about Pakistan. But Bannon hedged, noting that the U.S.-Pakistan relationship was a mixed bag. Bannon is, after all, a populist chaser. What matters to him most is power. That explains his interest in Khan, who assumed office last year. And that will also drive his attraction to Modi, which has not diminished.

This year, Bannon became the co-chair of the Republican Hindu Coalition — a pro-Trump and pro-Modi organization led by Indian American businessman Shalli Kumar. In 2016, the RHC endorsed Trump at an event featuring a Michael Jackson impersonator and lightsaber-toting “jihadists.”

Bannon is making a long-term bet on Modi. And on the surface, it looks like it may pay off.

Modi has a resounding majority in the Indian parliament and will remain in power comfortably for at least another five years. He is increasingly playing the role of strongman, arresting political opponents and unfriendly media barons, and putting one state — and perhaps more in the future — under his direct control. Under Modi, India is on a trajectory to become an authoritarian, majoritarian one-party state.

But Modi may be more vulnerable than it appears. His management of the economy has been abysmal. The rate of economic growth has slowed to around 5 percent, but could actually be as low as 2 to 3 percent. Modi will also inevitably face blowback from Kashmiris, who have been besieged by Indian forces for over a month. As Kashmir remains unstable and India’s economic slide continues, Modi will double down on divisive politics, which will become increasingly key to his staying in power. India under Modi is unlikely to see the sustained high levels of economic growth and social cohesion that it needs to thrive and compete with China.

And it’s the China factor that may be what sustains Bannon’s draw to India. Since leaving the White House, Bannon has become an increasingly vocal anti-China hawk. He’s digging in for a long war with Beijing and likely sees New Delhi as key in that fight. Bannon’s two favorite Asian leaders — Abe and Modi — are the region’s most powerful opponents of China.

This spring, Bannon and Islamophobe Frank Gaffney partnered to revive the Cold War-relic Committee on the Present Danger, with an anti-China focus. Bannon said that the United States and China have “two systems that are incompatible.” He proclaimed: “One side is going to win, and one side is going to lose.”

Kashmir may have been the focus of the meeting between Bannon and Shingla. The Indian news site The Wire, citing unnamed sources, reports that it “was part of India’s diplomacy campaign on Kashmir in the United States.”

That the Indian ambassador deleted the Bannon tweet the next morning is a sign that the “diplomacy campaign” isn’t going so well. And it’s faring poorly in large part because India’s human rights violations in Kashmir are seen indefensible by most public figures, except for fringe purveyors of hate. Those who’ve come out to support Modi’s Kashmir move include leading European Islamophobes Geert Wilders and Katie Hopkins. But as India moves steadily toward becoming a Hindu ethnonationalist state, it may slowly lose supporters in the West and be left with Bannon and other figures in the alt-right world.