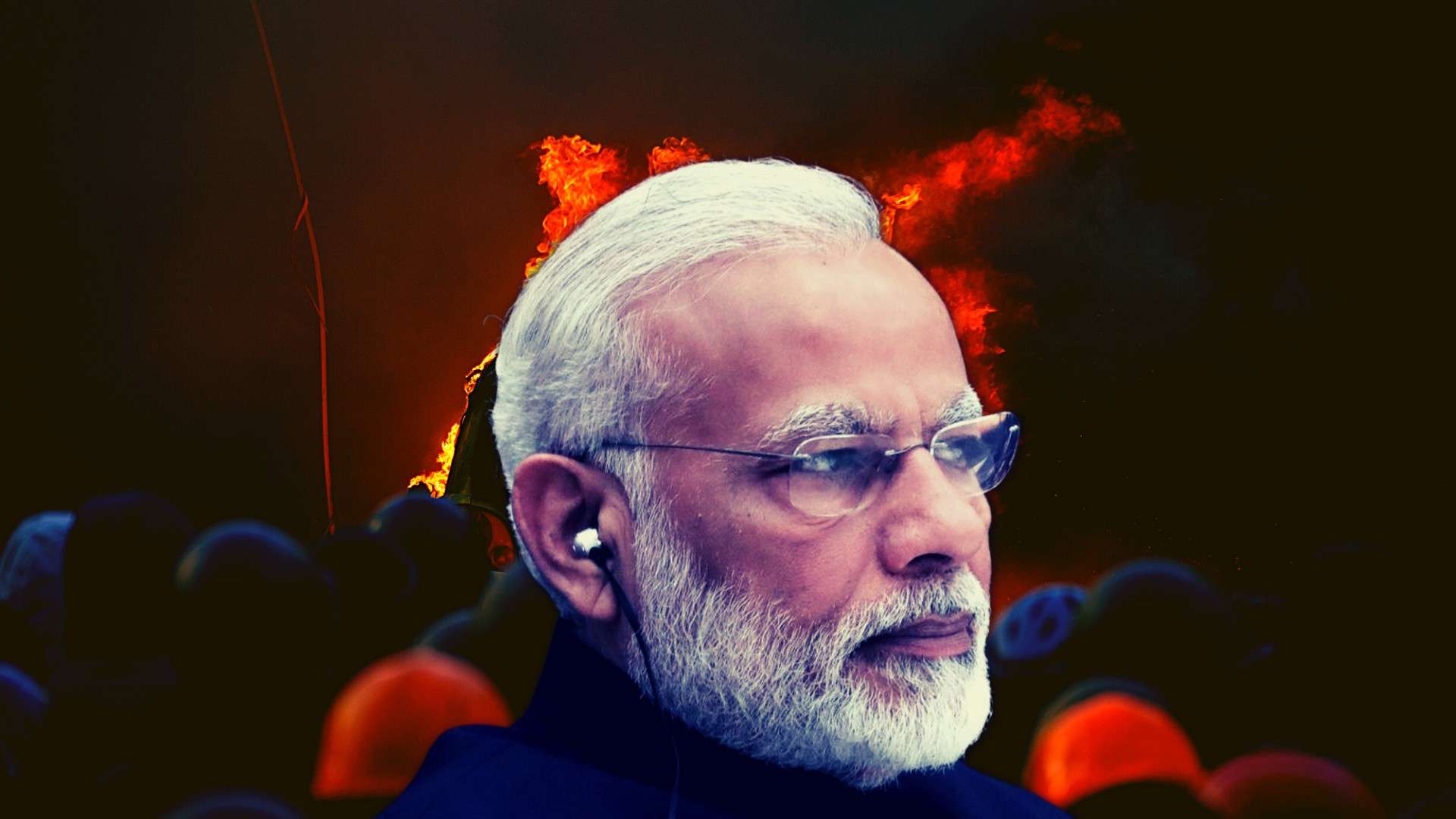 A two-part BBC documentary series aired this week has unveiled new evidence tying Indian Prime Minister Narendra Modi to the 2002 pogroms in the state of Gujarat that saw more than a thousand Muslims massacred by Hindu nationalist militias.

The revelations made in the program have triggered the ire of Modi’s supporters in India, with hypernationalist Indian news channels like Republic and Times Now railing against the British broadcaster.

What Does ‘India: The Modi Question’ Reveal?

The documentary makes public for the first time the findings of a British government investigation into the Gujarat pogroms.

The British Foreign Office report — produced by an inquiry team dispatched by then-Foreign Secretary Jack Straw — stated in clear and unequivocal terms that “Narendra Modi is directly responsible” for the anti-Muslim pogroms.

Modi, at the time, was serving as chief minister of the Gujarat state — a position he would hold on to till he became prime minister in 2014.

The investigation assessed that the violence had “all the hallmarks of ethnic cleansing” and could not have been inflicted “without the climate of impunity created by the state government.”

According to the report, Modi met with state police officials on February 27, 2002 — just hours after dozens of Hindu nationalists were killed in a train fire in the city of Godhra — and “ordered them not to intervene in the rioting” targeting Muslims.

Other investigations have also held Modi responsible for the Gujarat carnage. In 2002, Human Rights Watch (HRW) published a report, “We Have No Orders to Save You,” which concluded that the pogroms had “state sponsorship.”

The HRW report makes clear that Modi’s enabling of the systematic killing of over a thousand Muslims was an open secret. Within its body of evidence are chants by militants from the Hindutva extremist group Bajrang Dal:

“This is inside information, the police are with us. We will kill. Long live the Bajrang Dal. Long live Narendra Modi.”

According to the BBC, the European Union also conducted its own inquiry, which concluded that not only were police held back from preventing anti-Muslim massacres, but that Indian government ministers also took part in the violence.

In the documentary, Straw himself states that Modi “played a pretty active role in pulling back the police” and was “tacitly encouraging the Hindu extremists.”

The carnage in Gujarat began with the events of the morning of February 27, 2002. A train carrying activist-pilgrims associated with the Hindu nationalist Vishwa Hindu Parishad (VHP) stopped in the city of Godhra in Gujarat.

En route to Godhra, the VHP members, according to a report in the Washington Post, “carried on like hooligans,” exposing themselves to other passengers and pulling off the hijabs of Muslim women. The VHP has a long history of involvement in anti-Muslim violence in India, including the destruction of the 400-year-old Babri Mosque in 1992.

When they arrived in Godhra, the VHP members — as they had at earlier stops — refused to pay Muslim vendors for the food they purchased. A clash ensued and amid the violence, the train went on fire, killing nearly 60 Hindu nationalist pilgrims.

Initial police reports and subsequent investigations described the fire as “accidental.” But Modi claimed the incident — which took place just five months after 9/11 — was a “terrorist attack.”

B.K. Nanavati, a senior local police official at the time, speculated that both the Hindu and Muslim camps committed arson and that the VHP members could have accidentally set their own rail car, which was filled with kerosene and cooking gas, on fire.

What happened that morning in Godhra remains contested. But the events that subsequently unfolded were clearly an anti-Muslim pogrom.

Hindu militants went to Muslim localities and mixed areas in cities across Gujarat and committed mass killings and rapes. In total, more than 2,000 people were killed, according to the Foreign Office inquiry. The scale of the violence, it said, was “much greater than reported.”

Sexual violence has long been a tactic of Hindu militant groups. The Foreign Office report stated that in Gujarat, Hindutva extremist groups like the Bharatiya Janata Party (BJP), the Rashtriya Swayamsevak Sangh, and the VHP committed “widespread and systematic rape of Muslim women.”

Some of the violence was exceptionally barbaric. Ehsan Jafri, a Muslim politician, was cut into pieces by a Hindu mob after pleading to Modi for help by phone.

The treatment of women, children, and even the unborn was no less brutal. Celia Dugger of The New York Times wrote in 2002:

“A pregnant woman’s belly was slit open, her fetus raised skyward on the tip of a sword and then tossed onto one of the fires that blazed across the city.”

More than 100,000 Muslims fled to displacement camps, which Modi called “baby-making factories.” Ahmedabad, the largest city in Gujarat, remains segregated. Some Muslim families were relocated to a site outside the city near a mountain of trash, where they remain today.

For Modi, the fallout from the Gujarat pogroms was mixed. His party, the BJP, would win elections in Gujarat later that year and continues to dominate the state to this day. National news outlets like the India Today magazine called Modi the “Hero of Hatred.” The United Kingdom and the United States barred Modi from entry.

But by the time he became prime minister of India in 2014, Modi had shed his pariah status. India Today and other Indian media outlets hailed him as a superman. And world leaders, including Barack Obama, feted him like he was a statesman. In 2015, Obama, writing in TIME Magazine, praised Modi as a man who “reflects the dynamism and potential of India’s rise.”

The Gujarat pogroms made Modi into a pariah. But only temporarily. They ultimately paved his way to power at the national level and rise as a global leader.

Modi Punishes Those Who Expose His Links to Violence

The BBC documentary makes clear that there are serious consequences for individuals who speak publicly on Modi’s role in the 2002 pogroms. The program notes that at least 30 people in India declined to be interviewed because of fears for safety.

Even a former British diplomat who took part in the Foreign Office inquiry only agreed to be interviewed under the condition of anonymity. He described the events as “pogroms.”

Three prominent figures — R.B. Sreekumar, Sanjeev Bhat, and Teesta Setalvad — who’ve tied Modi to the violence have been arrested. And one has been killed.

Haren Pandya, who served as the top security official in Gujarat during the pogroms, alleged he was in a meeting in which Modi told the police to “not come in the way of the Hindu backlash” to the Godhra incident. In 2003, Pandya was murdered.

Modi refuses to do unscripted interviews. Some time after the pogroms, a BBC interviewer questioned him on the violence and Modi wagged his finger, responding angrily, “You Britishers should not preach [to] us on human rights.”

The backlash from Modi’s supporters to the BBC documentary series reflects a fear that the public will learn the truth about what took place in Gujarat.

How to Watch ‘India: The Modi Question’

“India: The Modi Question” is streaming online on the BBC website, but is currently only available to viewers in the United Kingdom. The first episode was uploaded to YouTube but has since been removed upon the request of the BBC due to a violation of copyright.