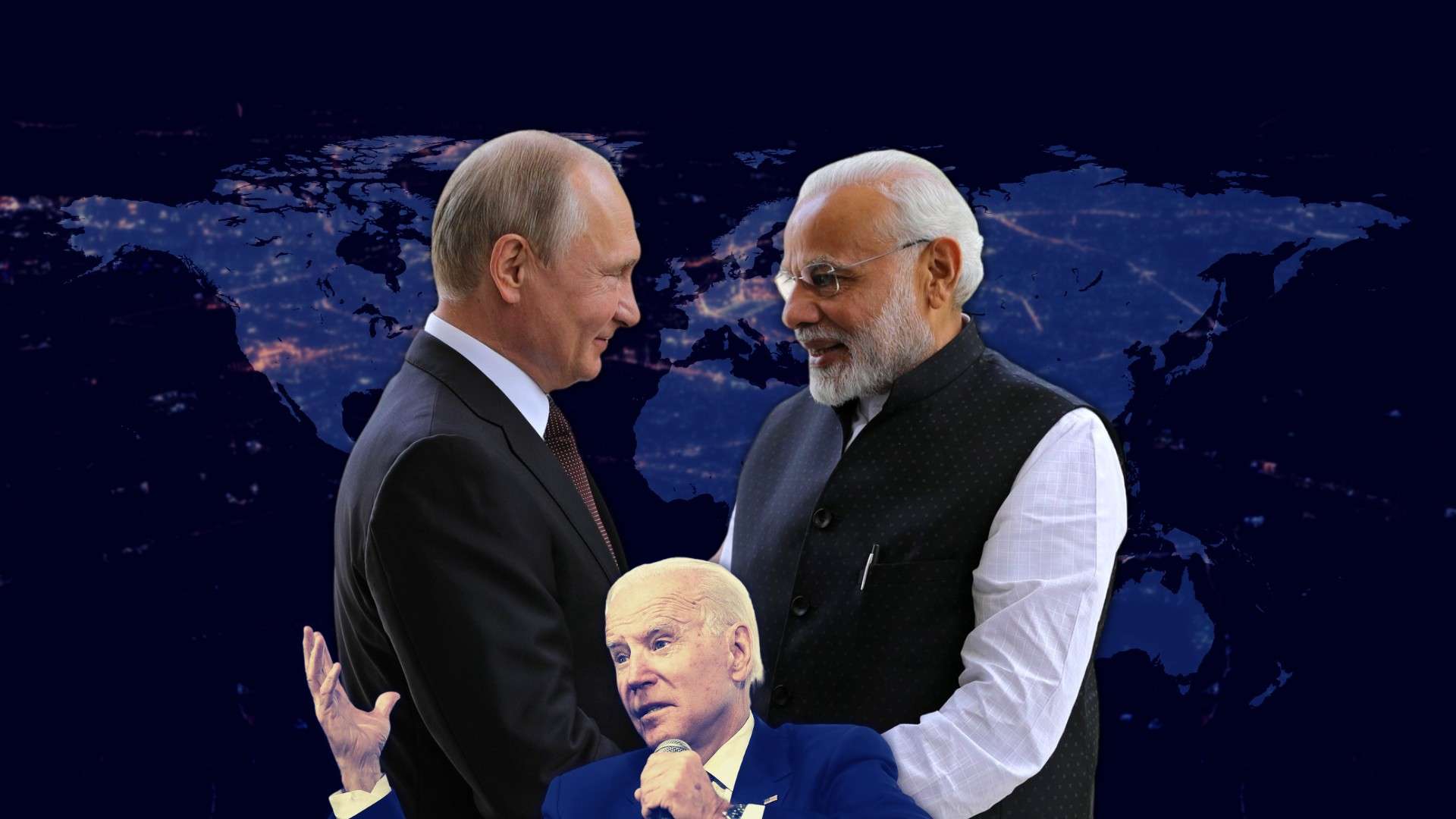 India has balked at allying with the US and the West after the Russian invasion of Ukraine, choosing to ramp up imports of oil from Moscow instead. (Image Credits: Russian Presidency, Gage Skidmore)

The Indian public sees the United States as a major military threat, second only to China, according to a new survey by the Morning Consult research company. The surprising findings serve as yet another reminder that India will not ally with the U.S. in what many see as an emerging cold war with China.

While a shared threat from China drives greater U.S.-India cooperation, India will never be a U.S. ally in the sense that European partners, like Britain, France, and Germany have been since the end of the Second World War.

The Morning Consult survey finds that while 43 percent of Indians see China as their greatest military threat, a sizeable number — 22 percent — view the U.S. as the top threat. Archrival Pakistan and longtime ally Russia come in tied at third with 13 percent of respondents identifying them as India’s top military threats.

The new poll results come as defense and strategic cooperation have grown over the past two decades.

During the Cold War, India, for the most part, was allied with the Soviet Union, even as it claimed to be a non-aligned country. A new era in U.S.-India relations began in 2005 with the signing of civil nuclear and defense framework agreements.

These pacts paved the way for a series of foundational military and intelligence cooperation agreements known by their acronyms: BECA, COMSA, and LEMOA. On top of these bilateral arrangements, the U.S. and India, along with Australia and Japan, have reinvigorated their cooperation group known as the Quad, expanding its scope.

India’s naval presence in the northern Indian Ocean can serve to restrain Chinese expansion into the region. And U.S. military hardware can help India attempt to develop the capability to deter China’s growing military might.

Yet, as this cooperation grows, contradictions in the U.S.-India partnership have risen to the surface. Chief among them: India’s alliance with Russia. Since Russia’s invasion of Ukraine, India has dramatically increased its imports of Russian crude oil, taking advantage of steep discounts. New Delhi has also refused to sanction Moscow at the United Nations. And India remains the top buyer of Russian arms, among which include the S-400 surface-to-air missile system.

The U.S. and India will find areas of cooperation to contain the rise of China, but India will go its own way, seeking to reap the most out of engagement with Western powers, without making any hard commitments.

India has not been and likely never will be a U.S. ally. In fact, it has no aspirations to be an American ally. Top Indian officials have made this clear. India’s foreign minister and grand strategist-in-chief, Subrahmanyam Jaishankar, has said time and time again that India seeks “multi-alignment” — cooperation with “many” different countries on specific areas of convergence, but “congruence with none.”

Is Hindu Nationalism to Blame?

India has a long history of seeking to maintain its sovereignty in foreign policy decision-making. And as a post-colonial country, it continues to resent Western powers that have dominated the global system that emerged in the wake of World War Two.

Still, it’s unclear why a sizeable chunk of the Indian populace sees the U.S. as a threat. After all, the U.S. has been quite generous to India in recent decades. U.S. strategic thinkers have advocated a policy of “strategic altruism” toward India: helping it rise as a global power with little, if any, expectations of getting something in return. And India benefits from the H-1B visa program — roughly 75 percent of its annual recipients are Indian nationals.

Rising fears of the U.S. may be rooted in growing Hindu nationalist sentiment in India. Prime Minister Narendra Modi has promoted the idea of India as a “Vishwa Guru” — or teacher to the world. While India has a rich civilization, it is no example of a healthy polity as poverty remains entrenched, political and religious violence grows, and centuries-old caste discrimination endures.

Yet hyper-nationalist news channels and Bollywood films in India promote a revisionist history and imaginary present — that India has returned to being the great Hindu world power it supposedly was before the interruptions of centuries of “Christian” and “Muslim” rule. Indian television and social media are replete with incitement against Christians and Muslims.

Many Indians believe the Hindutva hype. They think their country has arrived. Yet India struggles not only at meeting the needs of its own people, but also at competing with China. India continues to cede territory to China in the contested Doklam Valley where there have been violent clashes since 2020. At the same time, its imports from China hit a record high of $118.5 billion in 2022.

The U.S. is no threat to India. In fact, it has been an enabler of human rights abuses in India, refusing to even list it as a violator of religious freedom. But, in a post-truth world, believing anything is possible.