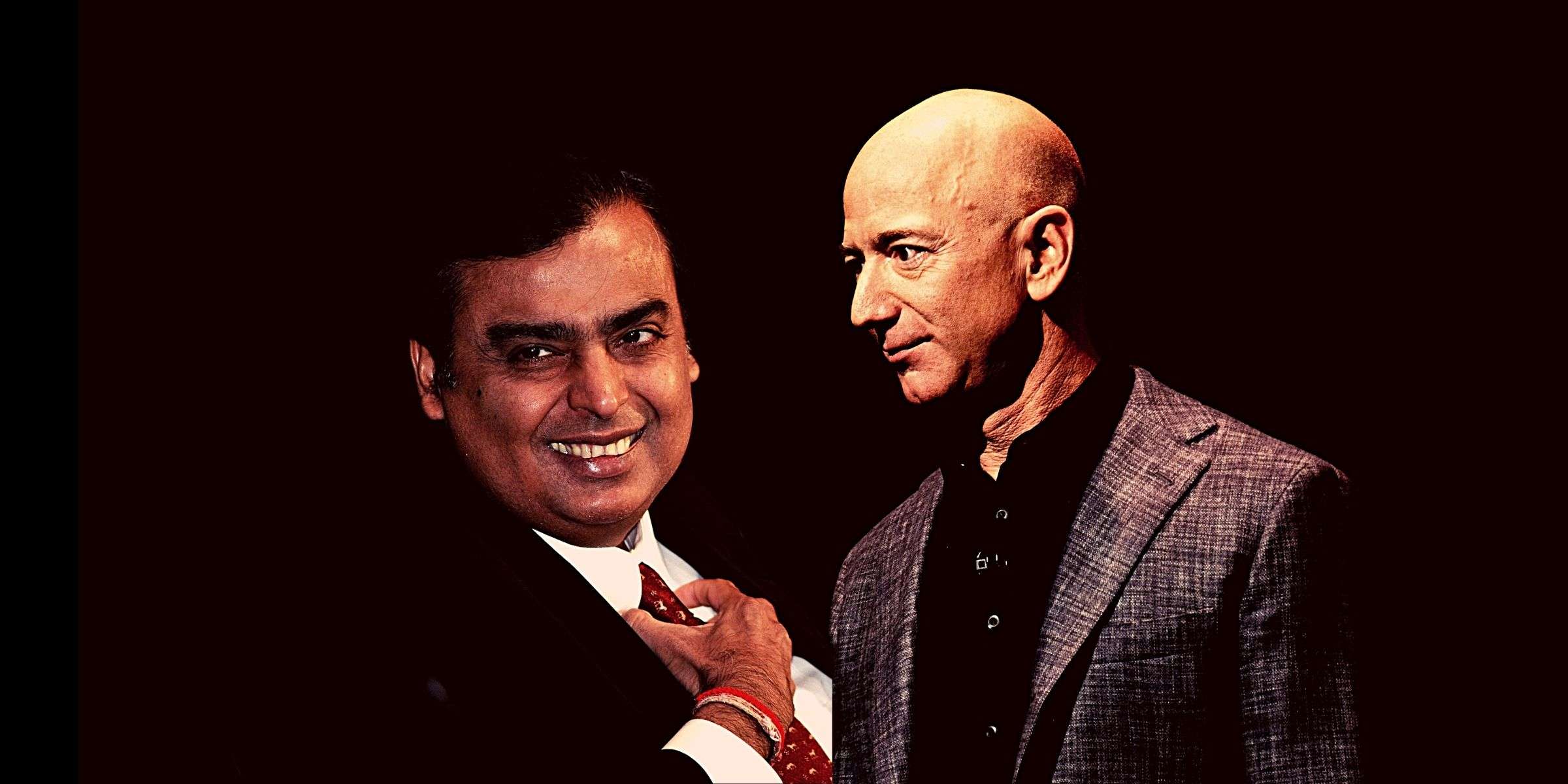 The battle between Jeff Bezos’s Amazon and Mukesh Ambani’s Reliance Industries over embattled retail company Future Retail is heating up. At stake is not just the future of Future Retail, India’s second-largest retailer, but also, quite literally, the future of the trillion-dollar retail industry in India.

Last week, Amazon accused the two firms of “collusion,” alleging that Future Retail was transferring its retail and logistics assets to Reliance “in a clandestine manner.”

The trilateral dispute is a test of the ambitions and political power of Bezos and Ambani — who are the richest men in their respective countries.

The difficulty of companies like Amazon and Walmart in India showcase broader challenges foreign investors face in doing business in Prime Minister Narendra Modi’s “New India,” where crony capitalism and Hindu nationalism converge to make for an unfair playing field for outsiders.

On March 15, Amazon took out advertisements in Indian print newspapers lambasting Reliance and Future Group, accusing them of fraud.

The dispute dates back to 2020, when Future Group — under distress due to the COVID lockdowns — sold its retail and logistics assets to Reliance Industries, India’s largest retailer.

When Future Group sold its retail and logistics assets to Reliance Retail in 2020, Amazon turned to the SIAC, which ruled that the deal between Future Group and Reliance must be stopped.

Rather than respect the ruling of the SIAC, Future Group then took the case to Indian courts. In August 2021, the case reached the Supreme Court of India, which actually ruled in Amazon’s favor, suspending Future Group’s deal with Reliance and upholding the decision by the SIAC.

But then in December 2021, the Competition Commission of India (CCI) suspended the 2019 Amazon-Future Group deal, alleging that Amazon withheld information about the agreement and misled it when it sought its approval in 2019. Months earlier, the CCI had already approved the Reliance-Future Group transaction.

Future Retail’s outlets remained operational because Reliance took over its leases and subleased them back to the beleaguered company. But this February, Reliance began terminating those leases and taking direct control of Future Retail stores. Amazon alleges that this takeover was not hostile, but, in fact, a ruse by Future Group and Reliance to mask their collusion.

The behavior of the CCI in this case points toward broader challenges foreign investors face in India both in terms of the absence of a level playing field and contract enforcement.

Amazon has invested over $6 billion in India and commands a third of the country’s e-commerce sales. But its entry, as well as that of rival Walmart, into the country has been rocky.

Modi’s Bharatiya Janata Party (BJP) has been wrongly portrayed as pro-business. The BJP and the economic wing of its parent organization, the Rashtriya Swayamsevak Sangh or RSS, have strongly protectionist tendencies, as reflected in Modi’s “Make in India” policy and the RSS’s opposition to Walmart’s entry into India.

Indian regulators are rightly concerned about potential monopolistic practices by companies like Amazon. And the BJP is sensitive to concerns of smaller vendors who face a potential existential threat from megaretailers. But the BJP’s apprehensions are suspended when its two favorite Indian conglomerates — Ambani’s Reliance and Gautam Adani’s Adani Group — are involved. And this is because the BJP isn’t interested in real competition or protecting the little guy.

The Coronavirus pandemic was crushing on the average Indian. The Indian economy shrunk by eight percent in 2020. But in the same year, the wealth of Ambani and Adani  — India’s two richest men — grew by roughly $41 billion. Wealth inequality is growing in India: the wealth of the country’s richest one percent is four times greater than that of its poorest 70 percent, according to Oxfam.

As the wealth of Adani and Ambani soar to meteoric heights, Amazon and Walmart’s Flipkart are facing potential investigations from multiple Indian agencies. The BJP’s behavior has little to do with protecting the public interest, but its own political allies.

In 2002, Modi presided over deadly anti-Muslim pogroms as chief minister of the state of Gujarat. He was made into a pariah, denied entry into the United States. But Adani and Ambani stood with him and were vital to his rehabilitation as a supposedly business-friendly politician, taking center stage at his “Vibrant Gujarat” annual events.

Reliance has not only helped launder Modi’s image, but it has also funded his party’s propaganda. This month, an investigative report revealed that a subsidiary of Ambani’s Reliance Group spent millions on Facebook ads promoting Modi and his BJP ahead of general and state elections in 2019. The ads also promoted hatred toward Muslims and Pakistan and leveraged Hindu nationalist sentiment against Reliance’s rival Amazon.

Facebook has played an enabling role in the spread of Hindu militancy in India. It showcases the only type of large foreign corporation that can succeed in Modi’s “New India” may only be ones that serve his political objectives and play by his arbitrary rules.

The Indian middle-class is a sought-after prize. But major foreign companies that are unwilling to subsidize Modi’s extremist political machine may want to think twice about investing in India.