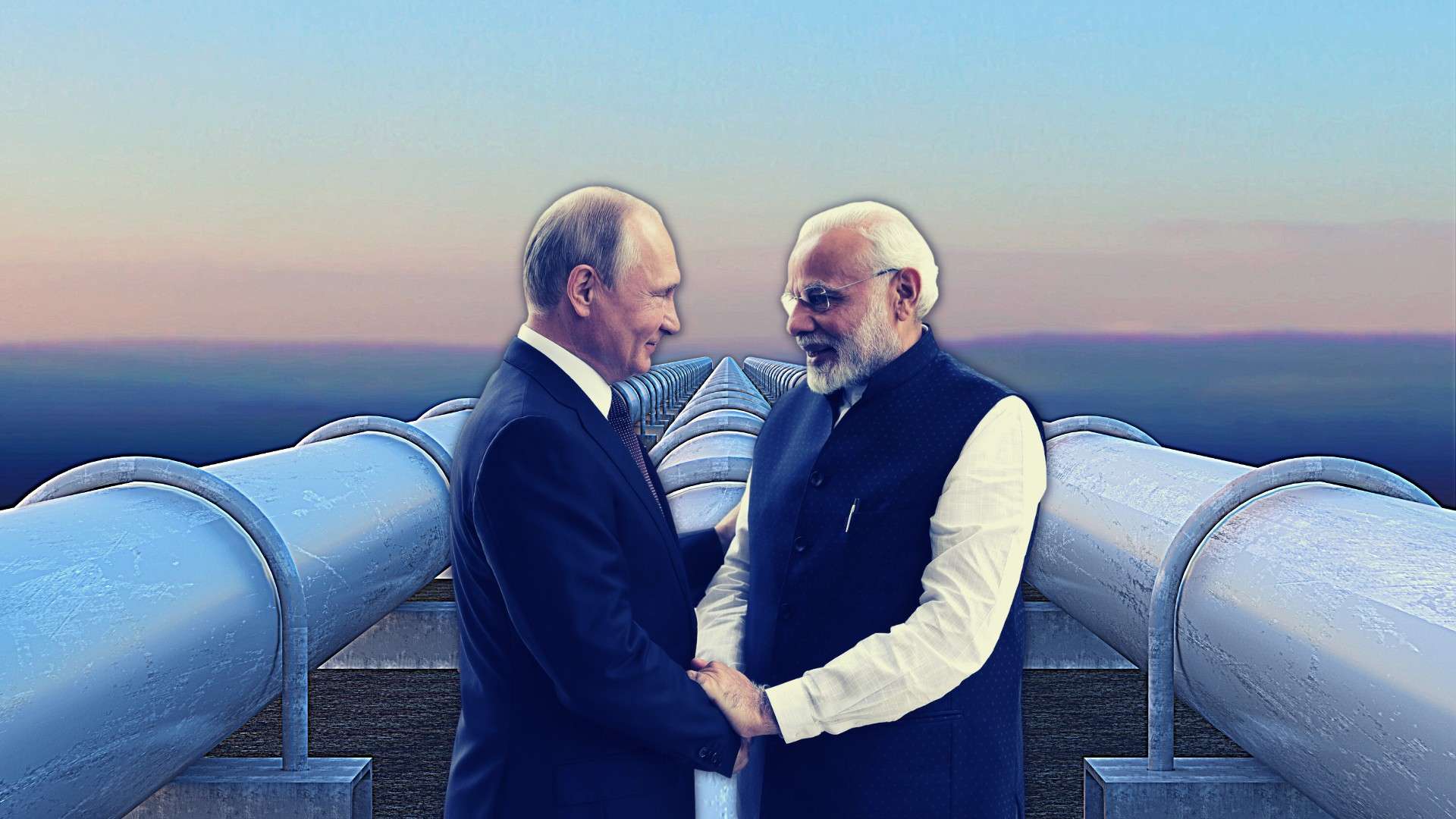 The Russia-India energy partnership has grown in the aftermath of Russia's invasion of Ukraine. (Image Credit: Russian Presidency)

India’s oil purchases also help steady the Russian economy amid Western sanctions over the war in Ukraine. India sees Russia as a “steady and time-tested partner” and welcomes a multipolar global order that includes Russia. This position is contrary to many Western countries that want to see Russia defeated.

When Western sanctions began crippling the Russian economy in April, Moscow offered discounted oil to India at as much as US$35 per barrel on pre-war prices. Russia also initially agreed to resuscitate the Cold War-era “rupee–rouble” trade mechanism, which would help it bypass sanctions.

The Russian share of India’s oil imports increased from 2 percent in February 2022 to 23 percent in November, unseating Iraq and Saudi Arabia from the top of the list. India has few options, as West Asian oil has been diverted to the European market to ease the impact of European economies’ decoupling from Russia.

But in practice Russia is still reluctant to utilize the rupee–rouble mechanism for oil due to its burgeoning trade imbalance with India, instead asking for payment in euros or United Arab Emirates dirhams. This dispute is yet to be resolved, so the dollar is still being used for Russian oil transactions.

India is the third-largest importer of oil in the world. Any diversion of its traditional sources of oil to economically advanced European countries could lead to competition and higher prices, which has the potential to wreak havoc on the already distressed Indian economy. European countries can afford to pay a higher premium for West Asian oil that India cannot match. India’s crude oil import bill in the financial year 2021–22 was US$119 billion, the highest in its import basket.

India has been trying to reduce its oil dependency on the Gulf region to avoid geopolitical repercussions if the Gulf states were to use oil as a strategic weapon. The volatile Strait of Hormuz and Pakistan’s proximity to the Gulf states have also been concerns for New Delhi.

In an era of “onshoring and friendshoring,” states conduct trade in strategic commodities with their friends and allies to secure themselves from geopolitical vulnerabilities. India has been using this strategy for almost two decades since the Kargil conflict of 1999, when India and Pakistan engaged in a military skirmish for control of the Siachen Glacier. During the conflict, Saudi Arabia, a major oil supplier to India, sold subsidized oil to Pakistan.

In 1998, when former Pakistani prime minister Nawaz Sharif was considering conducting a nuclear test in response to India’s Pokhran II nuclear tests, Saudi Arabia reportedly promised 50,000 barrels of oil per day to help Islamabad weather any potential sanctions. This has generated a fear that Gulf states could block India’s oil supply in the event of an outright war with Pakistan.

New Delhi’s oil diversification strategy initially faced headwinds as China outbid India for lucrative oil fields. India’s Oil and Natural Gas Corporation (ONGC) lost out to a Chinese consortium for an Angolan oil field in 2006 and for the giant Kashagan oil field in Kazakhstan in 2013.

But India’s “friend-shoring” strategy has worked well. ONGC Videsh Limited purchased a stake in Vietnam’s blocks 127 and 128 in the Phu Khanh basin in the contested South China Sea in 2006. Though oil exploration has been held up due to Chinese resistance, India has extended its stake in the blocks several times.

Russia has been a long-time energy partner for India. ONGC Videsh Limited made a US$1.7 billion investment in 2001 for a 20 percent stake in the sprawling Sakhalin-1 oil field in the Russian far east, with production starting in 2006. Before the Ukraine crisis, Sakhalin-1 was producing 220,000 barrels of oil per day, with ONGC selling its share of oil mostly in the international market.

In September 2019, India and Russia launched a Vladivostok–Chennai energy corridor to boost energy cooperation between the two countries. With oil from the Sakhalin oil field, New Delhi is in a firm position to continue its energy cooperation with Russia despite pressure from the West to take a position aligned with Western interests.

Russia has become India’s most dependable energy partner in an era where trade is more and more frequently being used as a strategic weapon.

In this article:Energy, Featured, India

Joshy M. Paul is a research fellow at the Center for Airpower Studies in New Delhi.