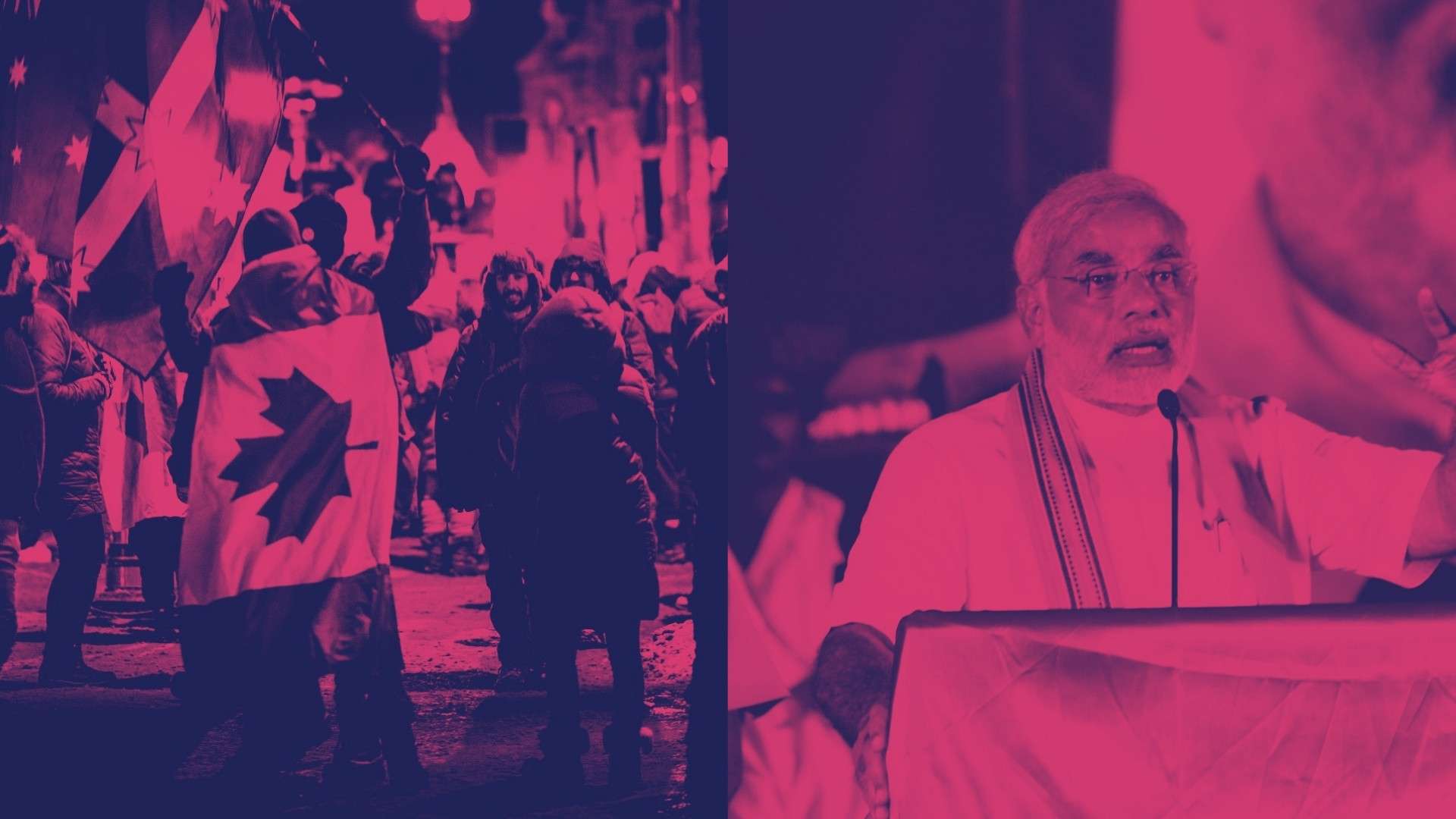 The "Freedom Convoy" builds off of narratives common to Hindu nationalists and other extremist movements. (Image Credit: Al Jazeera English and Ottawa Graphics)

The so-called “freedom convoy,” which began in January in Ottawa, has garnered international attention and sparked a flood of social media conversations.

To get a sense of how these conversations are framed, we analyzed tweets circulating in the “freedom convoy’s” social media sphere. Posts associated with #IStandWithTruckers and #TruckersForFreedom2022 claim to be fighting against state control.

Twitter can be a window into the lives of other people. The platform affords a style which enables short posts, with a limited number of words, and the posting of brief videos, images and memes.

These posts work to amplify extremist ideas in bite-size, easily shareable and visually engaging ways. The Pepe the Frog meme is an example of Twitter’s successful viral speed and reach. This frog became a symbol of white supremacy after Donald Trump retweeted a photoshopped image of himself as Pepe with a video claiming, “Can’t Stump the Trump.”

Analysis of Right-Wing Twitter in Canada, the U.S. and India

Our analysis of Twitter is part of a larger preliminary examination of social media used by right-wing extremist movements in Canada, the United States and India. What we found is a story of fascinating parallels and the discovery that seemingly disparate right-wing movements use similar logic. Their arguments rely on several myths, which are not mutually exclusive.

One is the myth of a “Golden Age.” This concept harks to ideas of a mythical past that is regarded as perfect. The fantasy includes the way traditional forms of authority were venerated and racial and religious superiority was uncontested.

Another myth, or old logic, is that of an “us” versus “them,” pitting immigrants and racialized others against a unified, imagined “us.”

And finally, the posts display a desire to restore an idealized masculinity that advances and reinforces nationalist and masculine projects. In short, a return to the “fatherland.”

At the base of these myths is a profound fear of losing one’s culture, religion, values and beliefs. This fear then gives life to the conspiracies about others who are different, the government and authorities.

For this discussion, we conducted a digital ethnography of various hashtags related to the “freedom convoy” from Feb. 6-12. We focused on hashtags widely used in public conversation. Using the TAGS Twitter scraping tool, we collected more than 100,000 tweets and manually thematized the data using critical discourse analysis.

The nostalgic yearning for a golden age of freedom is a common theme across extremist movements. This is often a shared desire to return to a time when their nation was racially “pure.”

There is a general feeling among far-right groups that there was less state intervention in that “golden age,” and that men could do what they wanted as long as they could defend themselves.

By framing their struggle as one for freedom and self-determination, the convoy presents its members as “saviours” of a once-unsullied nation, now contaminated by immigrants, racialized peoples, Muslims and others.

Other extremist movements use the same logic. Islamophobes desire a return to a Christian nation; racists crave a return to a white nation; and Incels wish for a patriarchal society in which men had unimpeded sexual access to women.

In India, right-wing Hindus yearn to restore a Vedic golden age, aspiring to restore the purity of their mythical Hindu-only rashtra (nation).

Right-Wing Narratives of ‘Us’ Versus ‘Them’

Another aspect of rhetoric in right-wing movements is the invocation of an “us versus them mentality,” evident in comments posted by Twitter users. These racist statements such as “taking the country back” and “save our country” contest what are perceived as Trudeau’s pro-immigrant and multicultural policies. They epitomize the myths of the superiority of the white settler nation and fear-monger concerning racialized others and the left (i.e., Antifa and BLM).

“@PaulChampLaw This is a peaceful protest. Unless you want terrorists like #Antifa #BLM burning your businesses down, looting, breaking car windows, burning the cars, beating innocent people up and burning your federal buildings and churches. Which would you have? #EarPlugs #FreedomConvoy2022”

In an analysis of patterns of language on Twitter, we note that this type of comment is not an outlier. Sentiments like these posted by so-called “freedom fighters” aim to instil fear among and about minority communities, threatening the violent consequences of multiculturalism versus the “peaceful protest” of the convoy.

Thus, the convoy seeks “freedom” by “taking back” the country from “lefties,” minorities, and immigrants. It seems that for them, Canada is a country that belongs to whites.

Patriarchal masculinity provides a fundamental component of the grammar of extremism. American sociologist Michael Kimmel argues that the “restoration of masculinity [and] retrieval of masculine entitlement” is an essential element that draws men to such groups.

The convoy’s exhortations of masculinity and toughness as key to re-securing the state demonstrate far-right extremists’ employment of hegemonic masculinity to legitimize hierarchical gender relations between men and women, femininity and masculinity, and pure and “corrupt” masculinities (i.e. racialized, minority and queer masculinities).

Many Twitter comments we saw have applauded the convoy for demonstrating tough, masculine ideals and acting as patriots who repudiate the “feminine” Liberal government.

Being “tough” provides a scaffolding grammar to represent the convoy’s “freedom fighters” as masculine archetypes, promoting and narrowing definitions of national identity, while positioning Trudeau’s Liberal government as weak, effeminate and not “man enough.”

One tweet, which said Trudeau needs to “show some muscle,” exemplifies how “freedom fighters” cast themselves as “real” men while depicting the leader of the Liberal party as someone who ran away “like a little chicken.”

Based on our analysis of Twitter, it is clear to us that the current “freedom convoy” and their supposed “fight against vaccine mandates” is much more than that.

Our evidence shows that many of these Twitter conversations about Canadian vaccine mandates and masks are folded into the same type of language and ideas used to discuss ideologies of purity, racism and patriarchy.

These ongoing conversations on Twitter are helping to pave the way for the larger convoy of white supremacy to barrel along unfettered.