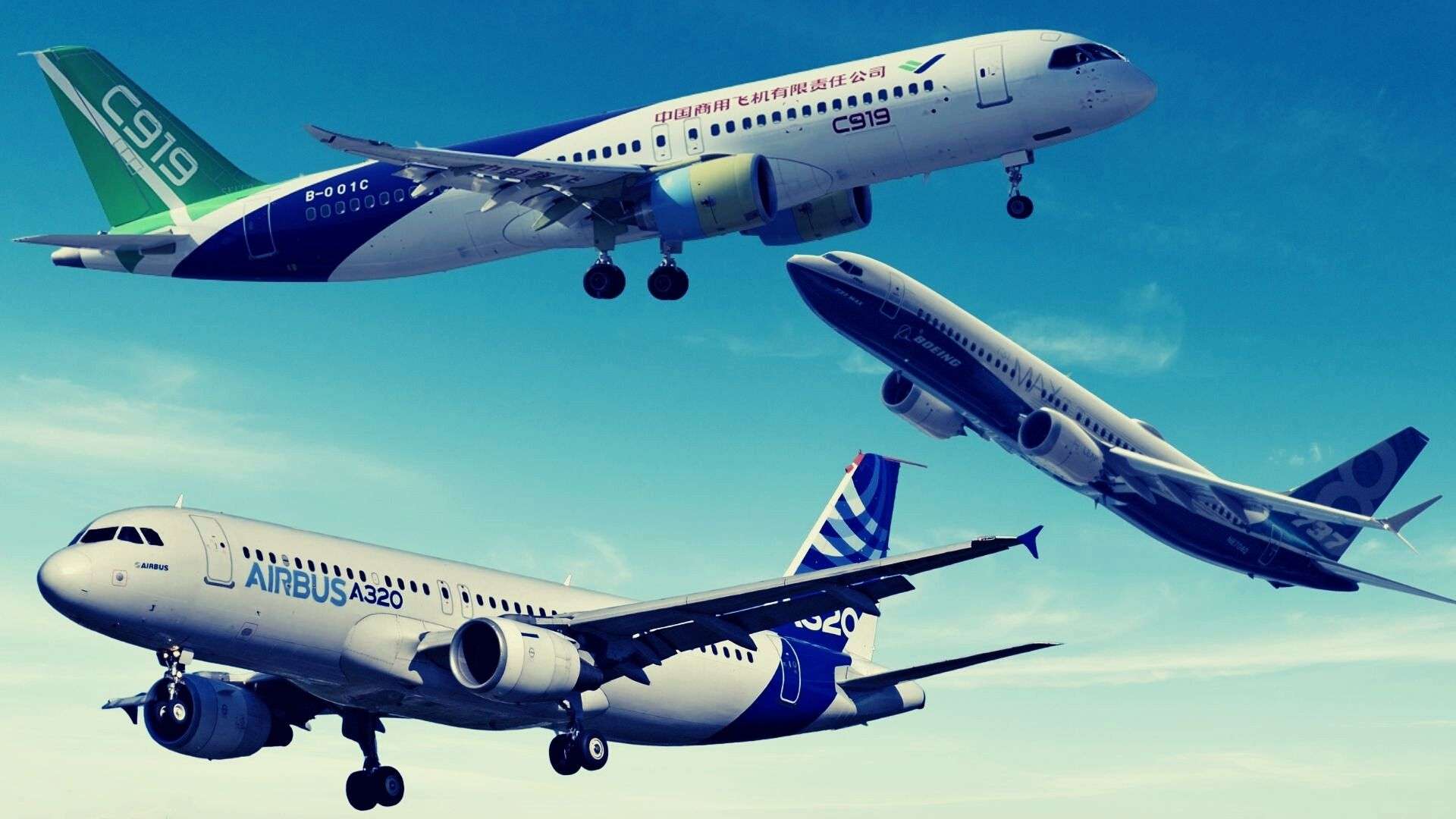 The C919’s struggles show that China’s path toward technological independence is filled with obstacles.

With the Comac C919, China seeks to take piece of the market from the Airbus A320 and Boeing 737 — the world's two best-selling commercial planes. (Image Credit: Derivative work sourced from Laurent ERRERA, pjs2005, and Ken Chen, via Wikimedia Commons)

China has pumped more than $70 billion into developing its first national passenger plane, the Comac C919 — a potential rival to the Airbus A320 and Boeing 737.

The C919 program is part of “Made in China 2025” — one of Chinese President Xi Jinping‘s signature initiatives. China aims to gain parity with the United States and other major industrial powers in ten high technology industries by the middle of this decade. And aerospace is one of these ten strategic industries part of Made in China 2025.

At the moment, the global commercial aviation industry is a duopoly. America’s Boeing and Europe’s Airbus possess a combined 91 percent share of the commercial aircraft market. With the C919, Beijing seeks to erode Western dominance in this critical industry. But as the C919’s struggles show, China’s path toward technological independence is filled with obstacles.

The Comac C919 is a single-aisle, medium-haul commercial aircraft. Its development was initiated well before Xi Jinping’s rise to power and the launch of Made in China 2025. In 2008, the state-owned COMAC — short for Commercial Aircraft Corporation of China — began developing the C919. Less than a decade later, on May 5, 2017, the C919 took off on its first test flight.

The C919 is not China’s first locally-manufactured commercial passenger jet. In the 1970s and 1980s, the Shanghai Aircraft Research Institute (SARI) developed the Y-10 aircraft. The program was abandoned after initial test flights. In 1985, SARI obtained a license to manufacture the McDonnell Douglas MD-82 commercial jet.

Comac currently manufactures the ARJ21, a short-haul 90-seater aircraft that began commercial flights in 2016. It has a standard range of 1200 miles, which makes it suitable for regional inter-city flights. As of last year, the ARJ21 serviced less than one percent of China’s domestic capacity, according to James Pearson at Simple Flying.

The C919, by comparison, has a capacity of upwards of 174 seats and a range of over 2,200 nautical miles — meaning it can operate medium-haul flights, such as from Shanghai to Chengdu, making it comparable to the Airbus A320 and Boeing 737. But is the C919 a serious competitor to the A320 and 737?

The C919’s chief advantage is the backing of the Chinese state. It is a strategic project part of the broader vision outlined by successive Chinese leaders, including the powerful Xi Jinping.

Like China’s other commercial aircraft ventures, the C919 is nothing to write home about. Beijing’s goal here is not to innovate, but to catch up to other industrialized economies and reduce its dependence on foreign technology. To meet its strategic goals, the Chinese government is providing ample funding for the C919’s development and China’s state-owned airlines are more or less obliged to purchase the planes.

The C919 may never gain a major share of the global commercial aircraft market. FlightGlobal, an aviation industry trade publication, projected in 2016 that the Airbus-Boeing duopoly would hold into 2035, with the two companies delivering a combined 88 percent of single-aisle commercial aircraft over the twenty-year period.

But C919 benefits from a guaranteed primary market — and a big one at that: China.

China is the world’s second-largest aviation market, in terms of scheduled capacity, according to OAG, a global flight data company.

Domestic demand (induced by official pressure) could drive economies of scale and, when combined with lower labor costs and state subsidies, might enable Comac to position the C919 as a low-cost alternative to the A320 and 737 for budget foreign airlines. The cost of the C919 is already reported to be around $50 million per plane — roughly half that of the A320 and the 737.

With that said, the C919 lags behind the A320 and 737 on very critical benchmarks, including fuel capacity and range.

The development of both the C919 and its CJ-1000A turbofan engine has stalled. In the near term, the C919 will use the same engine used on the Airbus A320neo and the Boeing 737 Max: the CFM International LEAP engine, produced jointly by America’s GE Aviation and France’s Safran Aircraft Engines.

The LEAP engine is highly fuel-efficient, making it an excellent choice for the C919. But, remember, the C919 is part of China’s broader strategic goal of developing technological independence from the west. Beijing has spent over $14 billion on the development of the locally-made engine for the C919, the CJ-1000A.

Jet engine development is a longstanding weakness of high technology manufacturing in China. By some estimates, China is two or three decades behind the major jet engine manufacturing countries.

These struggles extend into the military domain. China has faced reoccurring challenges in the development of advanced engines for its fighter jets, including the WS-10, which is currently used in the J-20 stealth fighter. In 2016, China merged a number of state-owned aircraft engine companies, creating the Aero-Engine Group of China and identified the improvement of local jet engine design in its 13th Five-Year Plan for the National Development of Strategic Emerging Industries

The C919 is billed as China’s first national passenger jet. But in terms of its components, how “Chinese” is it? For the foreseeable future, the C919 will operate using a Western engine. But its dependence on Western parts and technology goes beyond the engine.

Indeed, Scott Kennedy, a senior advisor at the Center for Strategic and International Studies (CSIS), a think tank in Washington, DC, argues that it is wrong to portray the C919 as a “Chinese” aircraft, given its dependence on American and European parts. According to CSIS, nearly 60 percent of the C919’s top suppliers are American companies, over 30 percent are European, and just 17 percent are Chinese.

So what will China’s C919 program achieve? It may end up serving as a proof of concept — and a costly one at that. But will it significantly advance China’s independence from western technology? That doesn’t look likely in the near term.

It is worth noting that Russia and China are partnering to develop a long-haul, widebody passenger aircraft, the CR929 — an alternative to the Airbus A330 and the Boeing 787 Dreamliner. The Sino-Russian consortium CRAIC behind the CR929 claims that it will begin mass production by 2025.

But the latest indications are that deliveries of the CR929 are extremely unlikely this decade. For its part, Russia is also developing an aircraft in the same single-aisle class as the C919: the MC-21. But with Moscow being hit with a barrage of sanctions after its invasion of Ukraine, the future of the CR929 and MC-21 are in question.

In this article:Aerospace, China, Featured