The Great Game in the Horn of Africa Has Just Begun 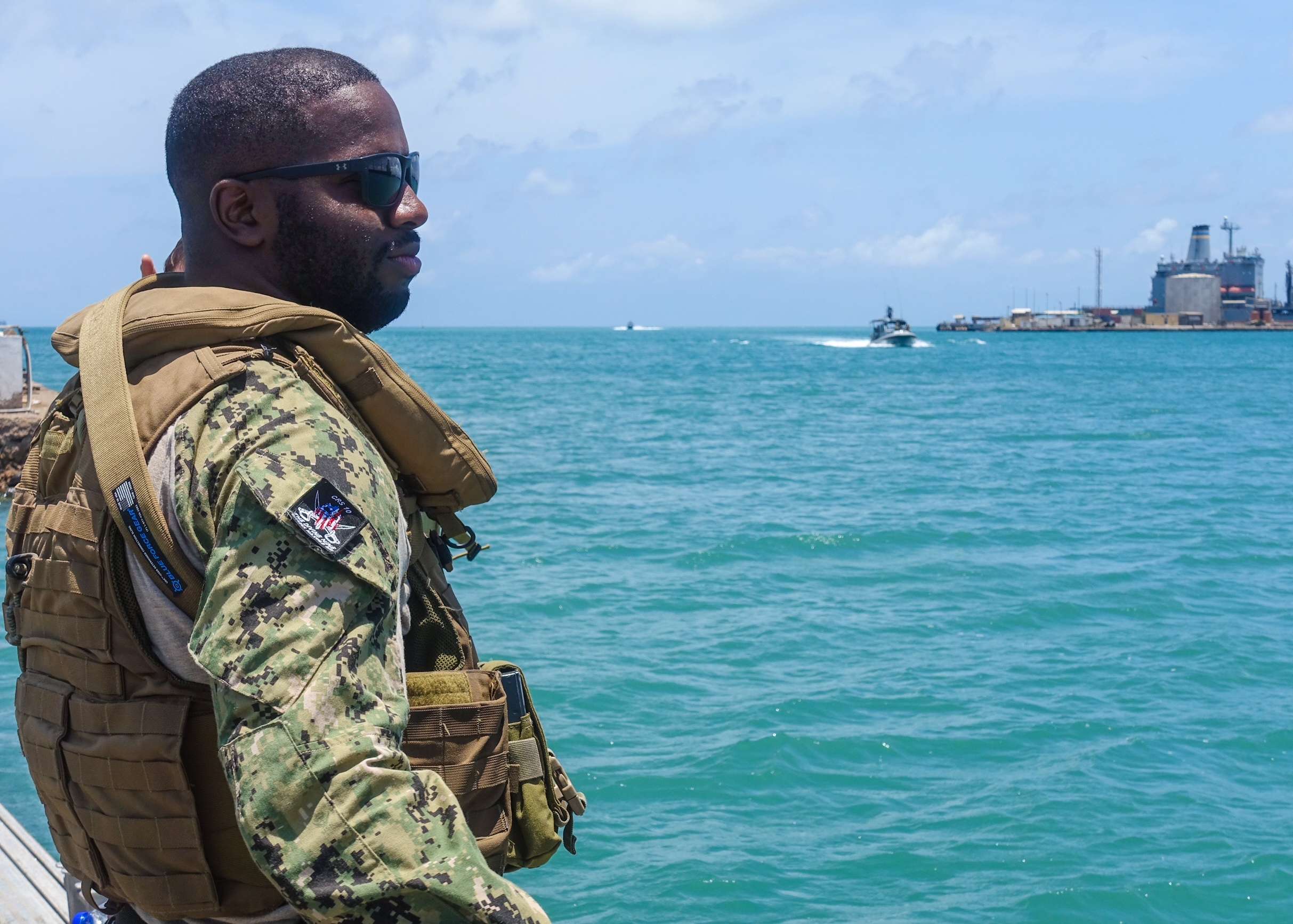 A member of Task Group (TG) 68.6 stands on security watch at the Port of Djibouti, located in the Horn of Africa. (Image Credit: U.S. Navy/Carlos A. Monsalve)

The visit of U.S. Secretary of State Rex Tillerson to Djibouti and Ethiopia this month coincides with a flurry of developments that reflect fluid power dynamics in the Horn of Africa — an increasingly pivotal region that includes the aforementioned countries along with Eritrea and Somalia.

On February 23, the Djibouti government terminated the operating contact of the Dubai-owned DP World for a section of the Doraleh Container Terminal, where a Chinese state-owned company retains the operating rights to most of the facility. The following week, the Ethiopian government acquired a 19 percent stake in the DP World-operated Berbera Port, a competitor to Doraleh located in the quasi-independent Somaliland region of Somalia — a move that was condemned by Somalia’s weak federal government. And just two weeks earlier, the prime minister of Ethiopia, Hailemariam Desalegn, resigned amid protests from disaffected ethnic groups.

The Horn of Africa is a region with a profoundly rich history. Its ancient kingdoms produced coinage, developed a native script, and erected large monuments requiring skilled craftsmanship and technical prowess. And the region has been home to the great Kingdom of Axum, which spread into southern Arabia, and the Ajuran Sultanate, a major player in the premodern Indian Ocean trade stretching across three continents.

These days, however, the Horn of Africa is mainly known for conflict and poverty. Security challenges emanating from and near the region, combined with its economic potential and strategic location, are driving great and local power competition.

Why the Horn of Africa Matters

The importance of the Horn of Africa boils down to three main drivers: location, conflict, and economics. Like several other Indian Ocean littoral subregions, the Horn of Africa is where geostrategic and geoeconomic competition are fast converging, if not blurring, as civil conflict, insurgencies, and terrorist threats endure. Crippling clan-based conflict, the ongoing war on terror, and renewing great power competition all interplay in this complex political ecosystem.

Great power completion in the Horn of Africa could be a boon for the countries of the region. Djibouti, Eritrea, Ethiopia, and Somalia might be able to leverage foreign interest to change the fate of their peoples for the better. But the involvement of external actors is more likely to prove to be a double-edged sword. Combined with misgovernance and rapid population growth, outside political interference will constrain, if not negate, the positive transformative effects of aid and investment.

The Horn of Africa is strategically located along shipping lanes connecting Europe with the Persian Gulf and Asia. It is where the Red Sea meets the Gulf of Aden and, by extension, where the Mediterranean Sea meets the Indian Ocean.

The most critical region of the Horn of Africa is the Bab el-Mandeb strait, a chokepoint where, at its most narrow point, a mere 18 miles separates East Africa from the Arabian Peninsula.

Annually,an estimated $700 billion in global trade passes through it, including 4.8 million barrels of oil and refined petroleum products a day.

Close off the Bab el-Mandeb and Europe-bound oil tankers lose direct access to the Mediterranean through the Suez Canal and the SUMED pipeline. Vessels from Europe and North Africa carrying oil and liquified natural gas also lose the most direct route to Asian markets. Europe-bound oil shipments would have to be rerouted through Saudi Arabia’s East-West pipeline, which runs from Abqaiq in the east to Yanbu along the Red Sea opposite Egypt and would be able to handle much of the volume. The remaining crude oil, as well as goods, would have to be redirected through a route 6,000 miles longer via the Cape of Good Hope at Africa’s southern tip. This alternative route not only adds transit time but also potentially more risk if vessels must near the coast of Somalia.

The Horn of Africa is a trade conduit for three continents. As a result, many of the world’s major economies have a military presence there to counter piracy and ensure freedom of navigation.

The tiny country of Djibouti, for example, hosts the military bases of five foreign countries: China, France, Italy, Japan, and the United States. But freedom of navigation isn’t the only pull factor.

The Horn of Africa is also home to the al-Qaeda-affiliated al-Shabab militant organization. Piracy is also rampant off its coasts. More recently, the region has also become a host to support facilities in the wars in Yemen against Houthi rebels, al-Qaeda, and the self-described Islamic State (ISIS).

In 2006, the United States established a separate command for Africa known as AFRICOM and its local command is effectively located at Camp Lemonnier in Djibouti, the only permanent U.S. base in Africa.

U.S. special operations forces have been operating in Somalia since at least 2006, assisting the Ethiopian invasion of the country and the overthrow of the Islamic Courts Union (ICU). Both the Central Intelligence Agency and the Joint Special Operations Command have waged a covert campaign against the ICU splinter group al-Shabab, which joined the al-Qaeda network in 2012. U.S. facilities in the region provide support to an African Union peacekeeping mission in Somalia, known as AMISOM, that has been supported by private military contractors Bankcroft and Dyncorp.

But the FGS is weak and foreign interference has bolstered the country’s clan-based and regional divisions. Regional states like Eritrea, Ethiopia, and Uganda have supported various factions in Somalia. Ankara and Washington have supported the FGS — Mogadishu is home to Turkey’s first overseas base —while Abu Dhabi has secured commercial port and military base agreements with the autonomous Puntland and Somaliland states. After Saudi Arabia and the United Arab Emirates launched a boycott campaign against Qatar in 2017, Abu Dhabi compelled several Somali regions to sever ties with Doha, while Mogadishu refused to join the boycott.

Private military contractors have also made bilateral arrangements with Somalia’s autonomous or semi-independent subregions. The PMC business model in Africa involves using anti-piracy, protection, and training programs as an entry point into the mineral extraction business.

The latest war in Yemen has also heightened the scramble for overseas military bases in the Horn of Africa.

The United Arab Emirates operates military bases in Eritrea’s Assab and Somaliland’s Berbera. These bases have enabled Abu Dhabi to enforce a blockade over the Houthi rebel-controlled port of Hudaydah across the Red Sea, ostensibly to prevent the smuggling of weapons sourced from Iran. Saudi-backed forces loyal to the deposed Yemeni President Abdrabbuh Mansur Hadi control Yemen’s southwestern coast directly abutting the Bab el-Mandeb. The UAE controls Yemen’s southern port of Aden and backs the secessionist Southern Transitional Council, which was recently attacked by ISIS.

As the southern Red Sea region becomes a focal point in the Saudi-UAE campaign in Yemen, Djibouti has become an arena of competition between the great powers. Japan established its first overseas base in Djibouti in 2011. China joined the club in 2017 and its presence is fast growing.

Djibouti has smartly leveraged its location, earning over $100 million a year from base leasing. But there is a much bigger economic game at hand, with Ethiopia as the center of gravity.

The combined population of the Horn of Africa is presently 125 million and is forecast to rise to 329 million by 2100. Combined with nearby states of Kenya, Tanzania, and Uganda, the total population of this broader region could rise to 1 billion by the end of this century.

There is a potential huge demographic dividend from East Africa’s population growth: a young, lower-cost, able-bodied workforce. Ethiopia and, to a lesser extent, Djibouti, are attracting significant foreign aid and investment. The most principal economic actor is China, which has already shifted some low-skill manufacturing to East Africa and has constructed a light rail line in Addis Ababa as well as an electrified railway line connecting the Ethiopian capital with Djibouti. China is also building Africa’s largest free trade zone in Djibouti.

The region’s geography creates dependencies, as well as potential areas of convergence and conflict. Ethiopia is the locus of regional economic growth, averaging 10.5 percent annually from 2005-6 to 2015-16. But it is landlocked. Its fate is intertwined with that of Djibouti, whose economy grew at a rate of 6.5 percent in 2016 and through which over 90 percent of its exports leave the continent. Addis Ababa would like to reduce its reliance on Djibouti’s port. Hence it acquired a stake in Somaliland’s Berbera Port.

The Horn of Africa, and more broadly, East Africa, is an emerging lower-cost manufacturing hub. But there are potential disrupters. For example, automation is making low-skill manufacturing less labor-intensive. That not only means fewer people will be employed to produce a given volume of goods, but greater productivity could offset the comparative advantage of lower wages in developing countries and eventually result in the localization of manufacturing closer to or in advanced economies.

Poor governance, poverty, and social factionalization also inhibit the rise of the Horn of Africa. Foreign countries tend to exacerbate these challenges.

Rapid economic growth and rising foreign investment have yet to make a dent in structural poverty. The World Food Program’s description of Djibouti in its January 2018 country report indicates that foreign funds coming into the country aren’t trickling down, at least yet:

“Djibouti is the least developed and most food deficit country in the Horn of Africa. The country has some of the worst social indicators in the world; 42 percent of the population lives in absolute poverty with 83 percent of those living in rural areas. Life expectancy is at 53 years.”

Horn of Africa countries have witnessed multiple civil wars and struggles with national integration and the question of federalism. Foreign actors often leverage these weaknesses for their own benefit. The DP World deal with Somaliland was done without the Somali government’s consent. During the Qatar-UAE spat, Abu Dhabi compelled or induced most Somali regional governments to sever ties with Doha, while the federal government of Somalia refused to do so. Meanwhile, the Somali federal government has become increasingly close with Qatar as well as Turkey, which now has a military base in Mogadishu.

Ethiopia, the heavyweight of the region, has seen high rates of growth but has no framework to ensure an equitable distribution of resources. And the influx of foreign loans could be a burden too heavy to bear. The Ethiopian government had to begin loan repayment to the Chinese government for the Addis Ababa-Djibouti railway before the line’s operations began. Even today, the line, which features an electrified track, lacks sufficient electricity to run full-time, according to a report in Der Spiegel.

Cash-rich foreign countries have done little to resolve systemic issues in the Horn of Africa. While there is potential for economic development to supplant civil conflict, counterterrorism, and piracy as drivers of foreign interest in the region, these older challenges will likely endure.

With counterinsurgency doctrine and nation-building no longer in vogue, great and regional powers and foreign military contractors are in pursuit of models to compete strategically and profit economically in spite of the systemic challenges that plague the area. “Winning,” it appears, no longer requires “fixing failed states.”