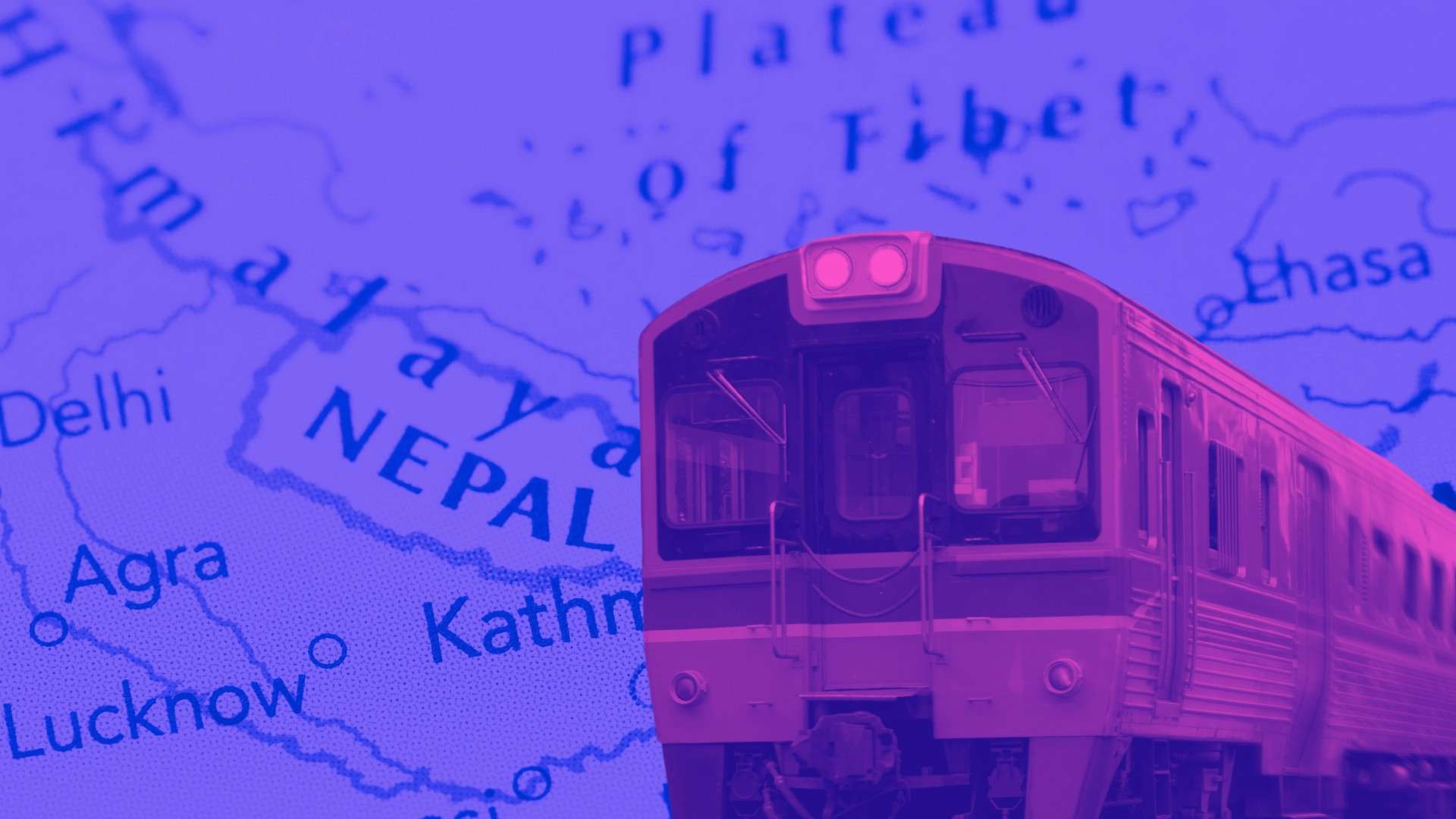 The tiny, landlocked Himalayan country of Nepal sits sandwiched between Asia’s two giants: China and India. For decades, it’s been India that’s played an outsized role in Nepali politics. But that’s now fast changing with the rise of Chinese influence in Nepal, challenging India in what it sees as its own backyard.

A proposed railway connecting China and Nepal has the potential to reshape the economic and strategic geography of this remote part of the world.

These developments take place as China nears the completion of the extension of its national railway network near the border with Nepal. The plan is to link the soon-to-be-completed line in Tibet from Shigatse to Kerung (Gyirong) to Nepal’s capital Kathmandu.

The proposed railway would give Nepal, dependent on India for access to sea, the ability to reach global markets through China’s advanced logistics networks and weaken New Delhi’s hold on it.

Nepal and India are bound by strong cultural and religious ties. India is also Nepal’s largest trade partner, accounting for roughly 70 percent of both its imports and exports. But India has often behaved more likely a bully than a big brother.

India also constrains Nepal’s access to global markets. Take, for example, the case of black cardamom, one of Nepal’s primary exports. It’s consumed in large quantities in Pakistan. But India doesn’t allow Nepali exporters to access Pakistan through a direct overland route via the region of Punjab.

A study by the International Trade Center highlights “monopolistic behavior” by “Indian intermediaries” as a barrier to Nepal’s development of this export.

The China-Nepal railway would break India’s economic dominance over Nepal, enabling Nepali exporters to use Chinese transshipment routes to global markets. It could also open up access to China’s domestic consumer market.

(Black cardamom is also used in Chinese foods. But Nepali black cardamom differs in taste from the Chinese black cardamom, known as tsaoko, and may not necessarily be a suitable substitute.)

For China, a railway connection into Nepal would also have strategic value. India fears the Nepal line could be extended to Lumbini, near the border with India — though the director general of Nepal’s Department of Railways says there are no plans at the moment to study such a project.

If completed, the China-Nepal railway would broaden China’s physical connectivity around India and advance it as a power in South Asia.

The project’s strategic upside is clear. But it is a big economic gamble for both countries. The railway project is estimated to cost $5.5 billion, approximately 63 percent of Nepal’s external debt. In spite of its short distance, the project faces massive engineering challenges given the route’s high altitude, mountainous terrain, and cold weather.

While the rail line would provide Nepal with some economic benefits, they’re simply not enough to generate the necessary revenue for operating and maintaining the line, and repaying a Chinese loan.

Infrastructure financing for poor countries like Nepal is typically done through grants and concessional financing. And Nepal may struggle to repay even an interest-free loan of that size, especially since the line’s operational costs would also require heavy subsidies.

It’s hard to see the project move forward without a major grant component. But grants play a small role in China’s overseas development financing. And as its own economic challenges grow, China has retreated from high-risk lending abroad, dramatically scaling back its Belt and Road Initiative.

With a poorly negotiated deal, Nepal risks trading dependence on India for overreliance on China. Small countries like Nepal must know that no great power is a benign geopolitical force.

The economic unviability of the railway project under typical Chinese financing terms is ultimately why it’s stalled. There may be geopolitical reasons too — just as a U.S. grant to Nepal under the Millennium Challenge Corporation was made controversial.

China is in no rush to build a railway in Nepal. Launching the feasibility study keeps the ball rolling and its options open given a fluid regional and global geopolitical environment.

But Nepal’s former foreign minister, Narayan Khadka, believes that the Chinese are “seriously interested in the railway.” And he says if they end up building it, it “will only be for geoeconomic reasons” given that its “special interest in Nepal is security.”

While the proposed China-Nepal railway won’t be going anywhere anytime soon, it’s a project worth keeping an eye out for. If it ultimately moves forward, China’s strengthening of ground lines of communication with its neighbors will be a sign of its strategic intentions in South Asia. And for India, it will be a reminder that its domineering behavior toward its smaller neighbors has costs.

In this article:Belt and Road Initiative, China, Featured, Nepal